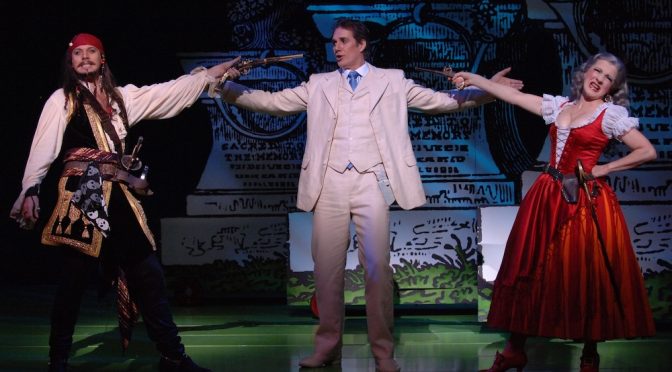 To quote Basil Fawlty I am about to ask the bleeding obvious. Have the Gilbert and Sullivan operettas finally done their dash? They are over a century old, the text and libretti must be obsolete by now and surely the cudgels that W.S. Gilbert took up and A.S. Sullivan set to music have no relevance to 21st century morality, social interaction or mode of life.

Not so, according to Stuart Maunder, former Executive Producer at Opera Australia and now a free-lance theatrical producer. “We are the same people as when Gilbert first lampooned authority,” he explains. “We are the same as when he raged against the class system or when he raged at self-made men who became so grand they totally ignored the people beneath them. The satire is still there.”

Which begs the question whether the success of the operettas is due more to Gilbert’s scripts than to Sullivan’s music. The music is an essential part, of course, but one only has to recall that Sullivan without Gilbert was, except for a period at the start of his career, an unqualified disaster.

His opera Ivanhoe, even with the imprimatur of Queen Victoria, failed miserably and the last opus he left us with, The Emerald Isle, is still unfinished.

Gilbert, on the other hand, had honed his art for about 10 years before he collaborated with Sullivan in the now defunct ‘Thespis’. The year was 1871 and William Schwenck Gilbert had already shown an ironic and savage wit in poems written for a popular satirical British magazine called FUN. Some of the barbs were illustrated by Gilbert who signed himself Bab and a collection of these Bab Ballads were published in 1869.

Gilbert was also a successful playwright and a director who challenged the boundaries of what could be said in the theatre. In fact Gilbert’s style with its double, and at times triple, rhyming and punning proved inspirational to the likes of 20th century lyricists Cole Porter, Ira Gershwin and Lorenz Hart.

By the time Richard D’Oyly Carte approached Gilbert to write a short play to complement Offenbach’s La Perichole, Gilbert already had the script of Trial by Jury in his pocket. Arthur Seymour Sullivan was commissioned to write the music and on March 25, 1875 a musical dynasty was born.

When HMS Pinafore was first proposed Gilbert was inspired by one of his earlier Bab Ballads when Captain Preece from HMS Mantlepiece sailed the seven seas accompanied by a crew comprising ‘sisters, cousins, aunts and nieces’.

The widespread success of the operettas was initially fanned by being created when the British Empire was in full bloom and the inhabitants of that empire preferred to live in the style they’d become accustomed to. From India to Australia, from South Africa to Canada and even to the fledgling United States of America, Gilbert and Sullivan provided a touch of home, when all that was good and wholesome was made in Britain.

These days there are G&S societies in almost forty countries. Currently there are two in the Philadelphia area alone, several in New York, San Fransisco, Houston, Cape Town, Canada, throughout Oceania and of course, a host of them in the British Isles.

Satire has never been far away in the operettas Gilbert scripted for Sullivan and that satire still elicits laughter in today’s topsy-turvy world. If his libretti were not poking fun at contemporary musical mores like the sextet in Trial By Jury mimicking Donizetti’s Lucia di Lamermoor or the script of Gondoliers emulating the switching of babies that is the basic plot for Verdi’s Il Trovatore, then Gilbert lampooned the establishment.

Trial by Jury (1875) satirised the legal fraternity, HMS Pinafore (1878) the Royal Navy and the British obsession with class distinction,

The Pirates of Penzance (1879) was a satire on romantic melodramas, Patience (1881) was a jibe at the army and the aesthetic movement of which Oscar Wilde was its principal exponent, Iolanthe (1882) had a go at the House of Lords and The Mikado (1885) Gilbert and Sullivan’s biggest success, made fun of bureaucracy within a Japanese environment.

Still beware of the pitfalls when producing G&S, warns Stuart Maunder, “The thing that is most difficult is crossing that fine line between parody and homage. The worst thing you can do is parody a parody. When you read Gilbert’s words you soon realise that it is a perfect example of Victorian nonsense but it is nonsense with a sting in its tail and you, as a director, have to create an atmosphere where that sting can still be exploited ….

“Gilbert was a great lover of the English language, a master of dialogue but at times you have to question some of the things he says…and that is what makes these operettas relevant to this age.”

Opera Australia has not had a G&S operetta in its repertoire for a few years. Still who can forget The Gondoliers of a few years ago, under the direction of Graeme Murphy when the chorus danced a frenetic version of the Cachuca with very pliable life-sized dolls.

Unusual locations are another way of maintaining the rage. Stuart Maunder himself directed Trial by Jury at London’s Bow Street’s Magistrate Court for a Covent Garden Festival. “We did it in modern dress,” he recalls. “The bridesmaids became female paparazzi. This was the same court that heard arguments on Pinochet’s fate in the morning while performances of Trial were held in the evening. It was also the same dock that committed Oscar Wilde to jail.”

Another bums-on-seats ploy is to use well-heeled personalities to fill some of the roles. Recently OA has cast Jonathan Biggins, Peter Cousens and Colette Mann as Buttercup.

Tito Gobbi-lover, Mel Tormé-admirer, cross-over singer, Benjamin Britten devotee and Living National Treasure, Anthony Warlow as the judge in Trial by Jury and Captain Corcoran in Pinafore was the major attraction in a successful OA production not so many years ago.

Warlow played the judge in Trial as “a garrulous older man with a Scottish accent and a fondness for malt”. Pinafore’s setting was the 1910ish era of the Titanic when gentlemen wore handlebar moustaches and ladies waxed lyrical about them. The role of Corcoran was then played as a homage to that late gentleman of the OA stage – Robert Gard.

Except for the odd word to make the script sound contemporary, nothing from the original was altered. Which speaks volumes for the genius of Gilbert’s words. I leave you with an example of that genius from The Mikado:

“The billiard sharp who any one catches,
His doom’s extremely hard –
He’s made to dwell in a dungeon cell
On a spot that’s always barred;
And there he plays extravagant matches
In fitless finger- stalls
On a cloth untrue,
With a twisted cue
And elliptical billiard balls!”