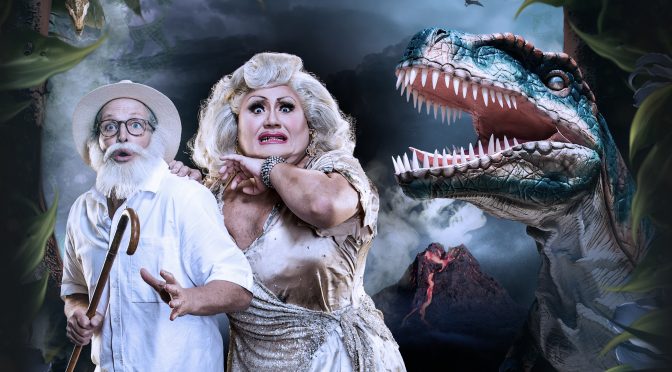 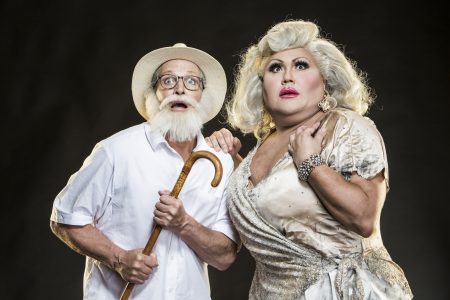 Above : Todd McKenney as Dr Richard Rabbitborough with Trevor Ashley as Gaye Wray.

‘Don’t dream it, be it’… that  classic line from The Rocky Horror Picture Show resonates so well with us as we can finally shake off lockdown sleep to take part in live theatre again, presented by talents such as Trevor Ashley in celebrated venues like the Sydney Opera House.

In this Rocky Horror vein one may well ask ‘Whatever Happened to Fay Wray?’ It appears her brave scream-queen spirit lives on in a maybe granddaughter, Gaye Wray, unstoppable and brilliantly reinvented in this latest version of theatrical blockbuster The Lyin Queen starring the equally unstoppable talent of Trevor Ashley and impressive ensemble.

Swinging back from pre-pandemic 2019, this savage romp through a quasi Jurassic Park setting (the troubled Isla Fisher) smashes back into our current fragile clearing, trampling over local identities, global stars, situations just screaming to be satirised and music from Madonna to ‘Moulin Rouge!’ . As well as super-quick-witted cutting comedy dialoguge, source songs are reworked with the trademark finesse of Trevor Ashley and co-writer Phil Scott.

Our story is set off the coast of Maroochydore, where an island has appeared. We witness a troupe of varying glamour and humours battle terrifying parklife scenes, sex, drugs and musical  genres to tell a busy tale not quite like the classic Jurassic blockbuster. The story of celebrity good and scientific evil unfolds with elevated humour and a stunning evolution of familiar music.

This show’s savage, fast-paced irreverence is just want we all need right now, even or especially when it feels like a slap across the face with a huge primate’s Christmas cracker. Silly has never been so clever and slick nor has it often been given such a makeover with such infectious comic timing and vibrant staging.

Costume design for this paleo-panto by Angela White plays savagely and subtly with the DNA of established movielot ot musical theatre imagery and textures. Stereotypes from The Lion King, Jurassic Park and other assorted examples from the adventure movie canon are well referenced and reinvented.

Inflatables of all hues unwravel around and above the stage. They jut out and wrap themselves about the very suitable Opera House Studio space. Puppetry including an alarmingly en pointe step-touching T-Rex will melt your doubly-vaxxed heart in an instant.

It is no shock that Todd McKenney, swathed in white scientist outfit, with a shock of white hair and beard excels in creating  the evil Dr Richard Rabbitborough, capable of mutating dinosaurs and viruses alike.

Challenges of characterisation including quick-change tender to tyrannical vocal moments with fluid movement and creation of authentic voice and body accent are facilely devoured by this popular star.

Support acts in the prehistoric theme park for Ashley’s Gaye Wray, the glittering once Home and Away star persona are equally as dazzling.

Shannon  Dooley’s botanist Flora Fern with laconic American twang, a dubious pleasure and pain approach to science as well as a penetrating ensemble singing voice is a joy to journey with.

Believable, buff Brendan Irving (Garrison Fjord) exudes Scandinavian charm and fragility in buckets. His moments exploring internet posting and the quicksand demands of celebrity life in duet with Gay Wray from Home and Away are priceless, perfectly vain vignettes. He amazes as he covers the stage on ground and aerialist levels. His talents and excellence as a stage and movement professional stand out on this anything goes island home.

As refugee African, and as repressed, unfortunate doctor’s assistant, or as a Karen with an airport Covid safety plan, Shauntelle Benjamin is an animated, spot on tour-de-force caricature creator. Hers is a fine presence for narrative enhancement in both ensemble and solo  moments.

This show’s success owes much to this cast and the obvious plethora solid preparation preceding this new season of the concept. Its gifted creative team bring us colourful, nicely lit scenes with exacting delivery of dialogue style from many eras of quality comedy writing practice. They all ensure the new look Lyin Queen fits so well into the chosen venue and our current place in history.

Get to the Opera House before the last show on December 12, before any more lockdown theatre closures or a natural disaster off the mysterious QLD coast. And when you visit this theme park, buy the show bag. You will need it to carry your way broad smiles and excess laughter home in.