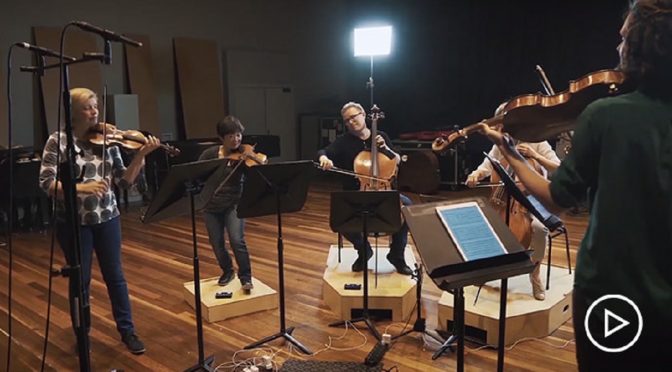 This particular concert by the ACO, as curated by cellist Timo-Veikko Valve,  with various arrangements for a string septet , developed themes expressing desire and aching loss spanning centuries .

The first half began with DOWLAND’s exquisite ,refined and flowing Lachrimæ Antiquæ a variation on his much loved  Lachrymae pavane. It was pure but cold with intensely woven harmonies .

WAGNER’s (arr. Sebastian Gürtler) romantic, swirling, passionate Prelude to Tristan und Isolde came next with its lush multilayered opening , use of portamento (sliding the finger to glide from one pitch to another shimmering fluttering strings and delicate cello all full of rich tension .

BACH s’ Ricercar 6 from A Musical Offering followed without a break with its refined yet rigorous , coolly mathematically precise ,delicately crisp yet fluid harmonies with changes in mood tone and articulation full of elegant , courtly seriousness .

The first half concluded with Metamorphosen by R STRAUSS (arr. Rudolf Leopold ) .In its ‘original’ form this work requires 23 players .It began ominously yet was richly lyrical in parts , swirls and eddies and then changes to a pulsating , hovering atmosphere full of stormy ,tragic emotion. Written in 1945 it is Strauss reflecting on the wiping out of art and culture by barbaric regimes in World War II. See if you can pick the way Strauss transforms the funeral march from Beethoven’s Eroica Symphony, something the composer said he did subconsciously , until, acknowledging the connection, he inserted a direct quotation at the conclusion of the work.

The second half consisted of MOZART’s Grande Sestetto Concertante in a ravishing performance. In this arrangement the solo and orchestral parts have been redistributed to balance the The first movement began sunnily and developed into a vibrant discussion among the players , with the main melody stated repeated and embroidered leading to the emphatic conclusion. The second movement , full of delicate heartfelt ,glistening playing , was anguished and powerful with the underlying pulsating melody .The final third movement began briskly , the main scurrying whirling melody stated and repeated , the discussion between the players leading to the dynamic conclusion.

There was rapturous applause at the end .

TRANSFORMING STRAUSS AND MOZART from the Australian Chamber Orchestra.