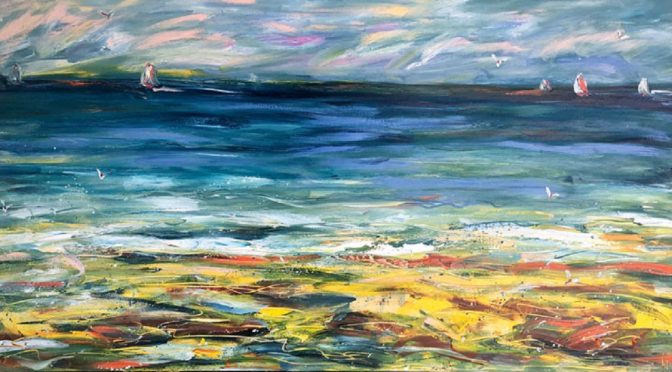 The current solo exhibition at the Mosman branch of Traffic Jam Galleries is work by Nada Herman entitled FLOWERS AND VISTAS .

Herman is based in Avalon and comes from the famous Herman artistic family. This exhibition is bright, bold ,joyous and colourful, with many thickly applied layers of paint on the various canvases.

Herman vividly captures various views of Sydney and its foreshores. One such view is from Balmoral to Neutral Bay. .The Neutral Bay painting uses the various buildings on the right hand side of the canvas to take our eye back to the Harbour Bridge.

There are large canvases focusing on Sydney Harbour with the Bridge and Opera House prominently featured as a background for sailing boats.

There are also hot summer reflections of life at the beach , crowded with sand beach towels and umbrellas .(eg A Day at the Beach) .This is contrasted with some works showing the bubble and flow of the sea in various moods ( eg Palm Beach , Sea Spray)

Flowers feature in many of the works – there are some wonderful vibrant still lives of flowers in vases ( eg Agapanthus , Lilllies and Lemons and Daisy Bouquet – in the later, note the fallen flowers outside the vase on the table ) but also flowers are used as a major part of the composition in some canvases dominating the foreground ( eg Beach Floral). Red hot pokers explode in the foreground in Red Hot Pokers Lillies and Agapanthus and the lilies complement them .The pokers also monopolise Red Hot Pokers Over Palm Beach .

Wonderful paintings of waterlilies with orange koi also are also included ( look for the upside down koi – is it a reflection? ) .

A vibrant energetic exhibition celebrating our harbour and flora.