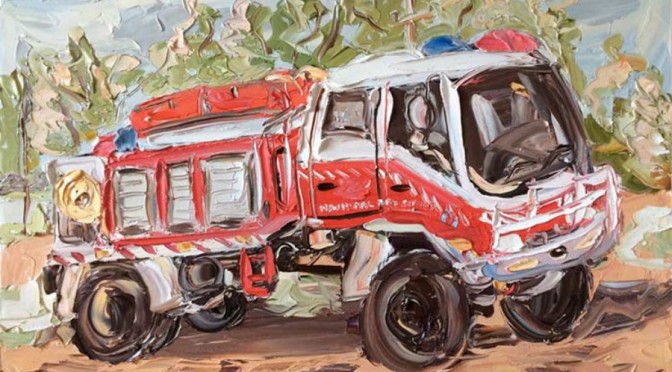 Sally West was born in West Wyalong NSW and has held many solo exhibitions . West is predominantly a ‘plein air’ painter. Her work uses very, very thick impassioned and vivid swirls of paint and her subjects range from explosive still lives of flowers, saucers and teapots to choppy paintings of ferry rides and beach scenes where you can feel the water and wind.

Most of the works are unframed and medium to large in size with the paint going over the sides of the work, but a few small works are neatly framed and displayed.

It is worth noting that some of the works included in this exhibition are hung on the slide out panels near the information desk.

Her current exhibition entitled ‘Here and there’ consists of some of West’s most recent works focusing on Sydney harbour and the central NSW farm where she grew up.

One  of her current works, “Beach Scene” is an aerial view and the people are shown mostly as dot like figures enjoying the sun and surf.

In his section of the exhibition , entitled Urban Myth , Philip Stallard’s paintings , drenched with vivid colour, are fresh expressive evocations of their subjects. Most of the works are quite large.

Some of Stallard’s works refer to recognisable objects, memories and notations. His paintings combine memories with feeling, in a way resembling a journal style

There is an abstract, rather poetic discourse going on,–strong colour fields are used and played with wild but refined intensity.

His use of line, direction and composition is sensational. The landscape is fluid, and part dreamlike. One feels there is a distinct Brett Whitely influence in his work.

Stallard has held successful solo exhibitions annually over the past 20 years in Sydney, Melbourne and Brisbane. He has also exhibited internationally and has undertaken many commissions.

Some of his works feature interesting collages using the integration of segments of numbers and letters.

Several of the works for this exhibition are based on time spent observing animal life at Taronga Zoo.

A six part Northhead Totem has yellow dots as blinking lights. West Head Fragment is long and horizontal, with the composition aggressively affirmed with a long line dancing just above the middle .