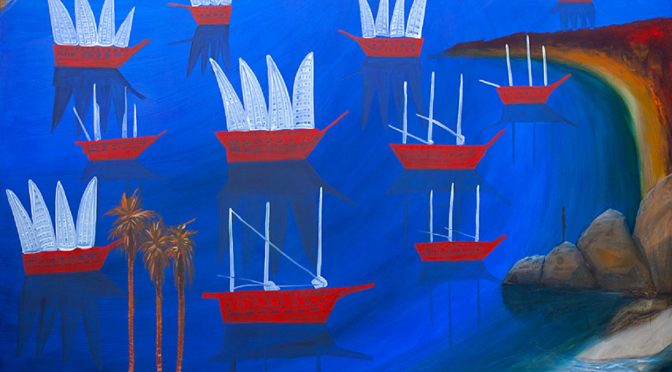 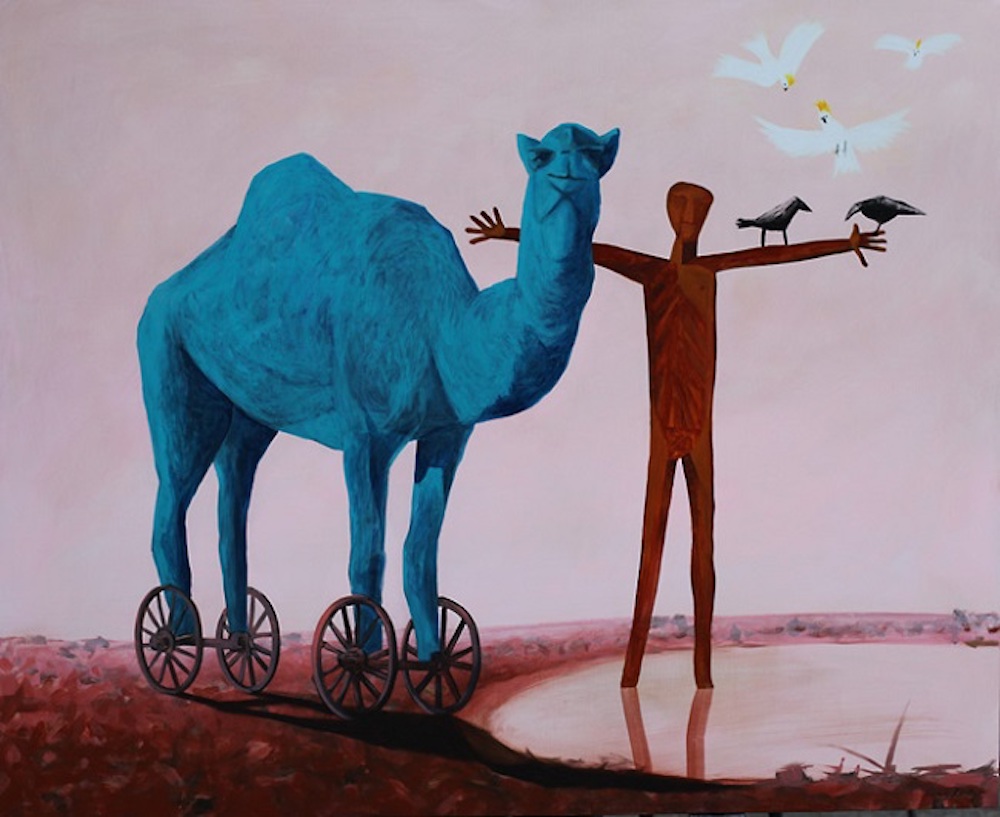 The current exhibition that has just opened at Traffic Jam Galleries Mosman is Dean Reilly’s strong and vibrant AUSTRALIANA .
There are hints of Drysdale , Nolan , Whitely and Tucker in the works. The subjects take us from the sea to the hot dry desert looking at both Sydney Harbour and the landing of the First Fleet and also the ill fated expeditions of Leichardt ( the rearing dinosaur like Apocalyptic Horse and Crocodile ) and Burke and Wills ( eg The Will of Burke with its startling blue camel on wheels ) for example. Plus there are marvellous depictions of wildlife ( eg Bush Turkey , with its blue mountain background and huge incubation mound , and Lyrebird , arrogant and darting , tail held proudly afoft).

The exhibition particularly explores colonization and the attitude towards First Peoples – look at for instance We Have Contact , a strange centaur like creature with a square head featuring a Wandjina head , and The First Fleet showing the ships in Sydney Harbour with stylised sails referencing the Opera House and the accompanying series of five smaller paintings showing individual ships .The striking Sirius Collector with a blue bowerbird on its mound and at the top a replica of the First Fleet ship is dominated by its red desert ( or is it blood?) colour .Squatter and Dog and Australian Space Invader with their stark landscapes and mysterious looming centaur like figures – ‘ earlier settler perceptions from an improvised indigenous perspective ‘ also examine this issue .As well, there’s Those Before Us , a haunting evocation of the ghosts of First Peoples , a strong curving landscape and three looming figures .

The Drover’s Wife with its stark trees , foregrounded indigenous woman in a white dress and her husband represented like a centaur , also captures the effects of colonization , assimilation and disconnection as they no longer really fit in either world .Viewers might also remember Leah Purcell’s fabulous 2016 play at Belvoir .

Colonization is also explored in Polly Wants a Colony – a trapped white sulphur crested cockatoo in a cage , surrounded by anthills , revealing the dryness and barrenness of the invaded land. And Mocking The Empire , with its kookaburra and towering machine like horse , and rather abstract human figure Harbour Bridge symbolize the dramatic opening fracas of the Harbor Bridge in 1932 – another comment on imperial expansion.

A couple of Australian legends are also referenced – Ned Kelly and his gang in On The Side Saddle , referencing stories about Steve Hart joining the gang , depicting bearded Hart in a dress and with a gun , and Tilly is Devine about crime boss Tilly Devine of Darlinghurst showing two sides of Tilly , one formal and heavily dressed , the other one of her workers in the spotlight in slinky red , a chair and hat in between them centring the canvas.

There is also the haunting The Matilda (as in Waltzing Matilda) – a stark curved landscape with a bird on top and the painting dominated by a floating , melancholy female figure. Surrender to the Horse in its forceful horizontal composition pays tribute to the explorers , trusting in their equine’s interior radar to find water. 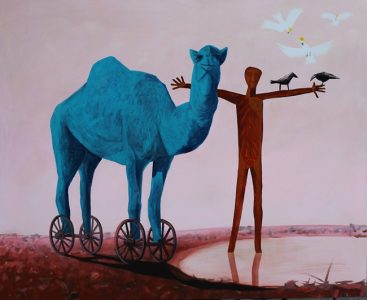 A most vivid and arresting exhibition.