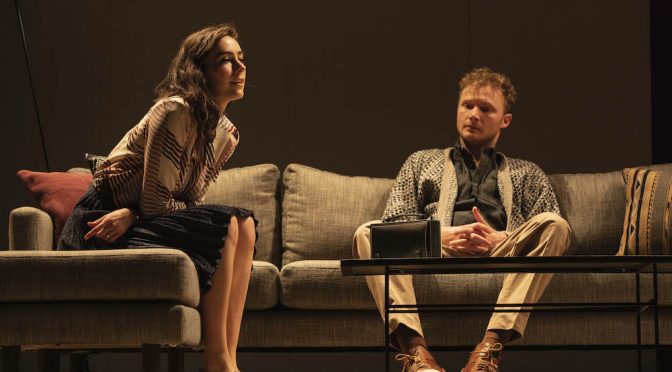 There’s also a sub plot which involves Annie who has taken up the cause of  Brodie an imprisoned Scottish soldier who has written a script which she wants to produce. Henry doesn’t offer any help , He thinks it is shite!

The show is superbly directed by Simon Phillips.  It’s great to see Phillips take on a ‘straight’ play rather than the musicals he has been  very successfully associated with  over the last few years.

A lot happens in the play including an intricate  play within a play scenario. The play takes a bit of time to ‘heat up’ and it’s only after interval that I felt myself truly involved with the action on stage.

Johnny Carr gives a very pleasing performance as the Tom Stoppard character playwright and intellectual Henry who is always trying to analyse everything and has to find another approach when it comes to matters of the heart.

Geraldine Hakewill is an attractive, bright and sensual Annie and one can  understand why Henry is crazy about her.  Annie also works as an activist for Brodie, a soldier who was arrested and imprisoned for setting fire to a wreath at the Cenotaph.

Rachel Gordon always lights up a stage. She is a luminous presence as the bright and cheerful Charlotte.

It has been a while since I have seen Charlie Garber on stage. He is always good value. Garber plays the rather crestfallen Max who sees his wife go off with Henry.

Shiv Palekar  plays Billy who fancies Annie and looms as a threat to Henry and Annie’s marriage. He plays Giovanni opposite Annie’s Annabella in ‘Tis Pity She’s A Whore’.

Dorje Swallow makes an appearance late in the play as the volatile Brodie who is one of Annie’s ‘missions’.

Charles Davis’s set is  a star in its own right. It is multi-faceted,  with a great use of a revolve  to take us to the various ‘locations’.  Cleverly  Davis’ manages to fit a train compartment into the middle of the design,

Davis’s costume design is also first class with the choice of clothes always befitting the character.

The ever reliable Nick Schlieper lights the stage well. James Brown’s  soundscape was atmospheric without being intrusive.