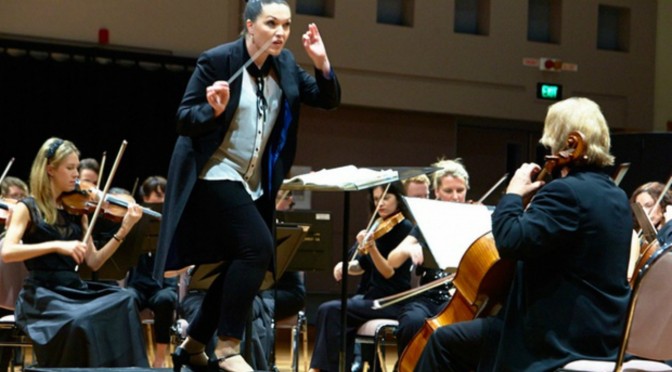 Chen performed with scintillating flourish and a confident flair. Her blend between dazzling technique and intelligent lyricism was a delight. Chen’s skilfully articulated violin spoke profoundly to us and with the orchestra.

There was always a satisfying balance between the violinist and TMO. Thematic reiterations from the full orchestra were boldly played. These moments propelled the structure suitably forward.

The hazardous challenges for any violinist within the opening movement and its cadenza were devoured by this musician, and converted instead into expression painted in broad strokes. Chen’s conversation with the full orchestra or separate sections thereof were well nuanced. These dialogues were imbued with spontaneity and refreshing freedom.

In the Andante second movement Canzonetta the orchestra and violinist provided the contrasts the work and our senses were craving for. The balance between soloist and TMO continued to be excellent, and the woodwinds, like all other sections when required, played their pivotal role with poignant precision.

The exciting finale was executed at top speed but remained seamless and fluid. This movement’s well-shaped and comfortably spaced themes from solo violin were full-bodied and highly contrasted in character. Their presentation was a particular highlight of Chen’s dynamic playing of this well-known concerto.

Jumping forward to the early twentieth century after interval, we heard the narrative epic which is Sibelius’ Symphony No2 in D major Op 43 (1902). In the interpretative hands of conductor Sarah-Grace Williams this work became a tour de force of exceptional poise, eloquence and atmosphere.

TMO’s performance of this sprawling symphony never allowed for moments of down-time or any pedestrian playing to creep in. The clean solos, textural shifts across the orchestra and synchronicity of ensemble attack were repeatedly thrilling.

The woodwind choir and soloists of TMO have never sounded as good as when heard in the second and third movements of this symphony. The most rewarding effect of this performance was how efficiently the alternating varieties of colour and orchestrations were managed albeit for extended periods of music or in quick shifts.

Nowhere was this quality more focused than in the architecture and contrasts of the rondo Finale: Allegro Moderato, which led to a well-deserved huge ovation from the capacity crowd. This movement’s recurring theme in all its guises was joyously repeating in one’s musical memory for some time after the concert had to come to a close.

Sibelius’ craftsmanship combined with TMO’s mature and disciplined approach to their artistry resulted in a powerful display of the impact that fine orchestral music can have over an audience.

TMO’s accomplished sense of ensemble and its strong character within the group as seen throughout the 2015 Met Series has placed it in a fine position for communicating more fine musical and artistic feeling in 2016.

More local soloists, repertoire from Australian composers and solid, engaging interpretations await audiences next year. Tickets to the 2016 Met Series at the ABC Centre as well as the Majestic Series of concerts to held at the Hydro Majestic Hotel in Medlow Bath are now on sale.

The future looks bright for TMO, which has established a firm place for itself in this metropolis and beyond. Throughout 2015 this orchestra has showed that they can draw a crowd, and more importantly never fail to impress.