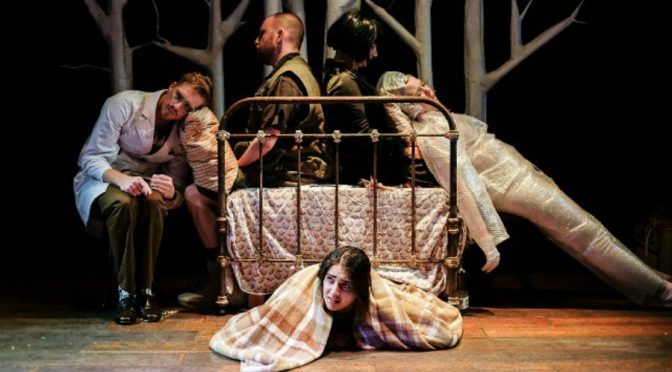 It starts with an intrigue. We can see who but what is the issue and why? Intriguing beginning yes but this is not mystery theatre. This is the theatre of chaos writ large in a small space. I loved TINY REMARKABLE BRAMBLE and I “wasn’t even hammered so I have no excuse!”

Alice (Geraldine Viswanathan) is a bedbound, self-absorbed, ennui ridden, depressive when we meet her. Not hilarious so far, right? Sparklingly comic BFF Sonny (Catherine Terracini) is trying to talk her into … going somewhere? feeling something? remembering somehow? And not really succeeding. This is a very reluctant protagonist who will eventually rouse enough to go somewhere somehow for something. It gets a bit weird and crazy after that.

There is a Brigadier of something nameless (Thomas Campbell), a sot called Vino (Lucy Suze Taylor ), Douglas a chemist we think because he has a lab coat (Michael Whalley ) and Pipkin (Contessa Treffone)who might be a girl in a bubble. They are preparing for a talent quest perhaps. A blending back into Alice’s wounded and split psyche perhaps? A break from their societally allocated role? Theories abound but I reckon I will hazard a guess. I have seen enough preparing Theatresports teams to stick my neck out here.

What I can say for sure is that this is one of the best examples of ensemble work I have seen in a long time. And whatever they are on I want some. The energy between them crackles even in the twofers and when they all let loose…. split second timing, farce with no doors and the sugar fuelled mania is wonderful to watch. A ludicrous amount of lollies are consumed!

What a team. Then Alice turns on them and they turn on her in return and there is genuine emotion to be felt by the audience. In laughing out loud or chuckling away, we didn’t realise the emotional investment we had in these grotesques or archetypes. Will they sing in harmony before we leave their world rent by tiny little barbs?

TINY REMARKABLE BRAMBLE is brilliant absurdist nonsense as written by Jessica Tuckwell who admits to a life characterised by a distinct lack of strategy. Yet the structure of this chaotic fun is very strategic and the 75 minutes rollicks along. There is a lovely interlude about the ocean which is lyrical and evocative and gives the audience that little moment to “focus on your own dysfunction”. It’s superbly rendered by this terrific cast.

Cathy Hunt’s direction has a lot to do with that too. No mean feat controlling that lot I would say, especially after then began to rehearse with those lollies! But every movement is meaningful, the stage uncluttered until busied and the relationships are pure so that every look carries emotion and understanding.

TINY REMARKABLE BRAMBLE is a joy to watch with the added pleasure of trying to work out what the hell happened after it is all done.