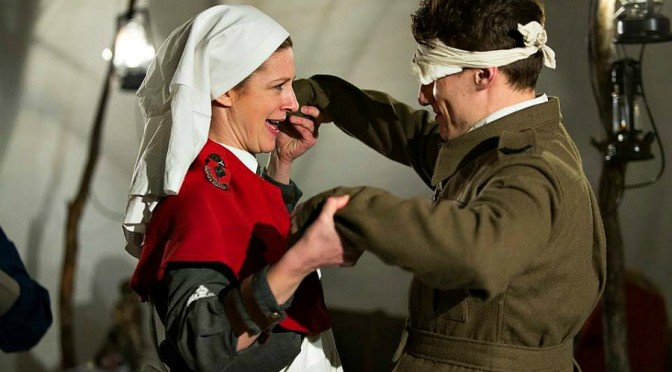 As we lead into the 100th Anniversary of the ANZAC tradition, established in Gallipoli through the fierce bravery and camaraderie displayed by the Australian and New Zealand troops under the most appalling conditions, we welcome the opportunity to be reminded of the stories of these soldiers and their sacrifice. However, there were also Australian and New Zealand women who endured hardship and experienced great trauma during WW1, – the nurses. It is heartening to see their stories are being told as well, without gloss or glamour.

THROUGH THESE LINES writer and ensemble member, Cheryl Ward (she plays the fair but strict Matron Ada Watson) demonstrates extensive research and effective manipulation of techniques and emotions to bring to life the story of Sister Florence Whiting, (Kate Skinner).

Florence was a young woman who didn’t fit in at home and signed up, clearly against the wishes of her family, to look after the men wounded in battle. We join her as she boards the Kyarra Troopship on November 1914 and is immediately seasick before even leaving Sydney Harbour.

The atmosphere on the ship is jolly and full of the sense of adventure. There is much flirting and frivolity until the spirited revels of Christmas and New Year cause Captain McLean (Gary Clementson, in one of his many roles) to impose restrictions on the women, as the men must not be distracted from vital tasks ahead.

The atmosphere changes rapidly once they reach the war zone in Egypt and it is not just the relentless work, lack of sleep, supplies and water that is hard. Being on the edge of the event in the makeshift hospital, we experience the dehumanising brutality of war in the rape of one of the nurses. It is powerfully and sensitively presented, highlighting that it was not just the men who were wounded and damaged.

April 25th, identified as a Red Letter Day, is presented with pounding sound effects of bombs and guns as stretchers are brought in with the wounded and dying for treatment. The stretchers were then drained of blood before going back out to collect more victims of the battlefield. This is then all repeated as a dumb show, with the horror, fear, hurt and pain being even more potent through the numbness of the silence. The question is asked “How much will a piece of earth cost?”

The next part of the journey is the tent hospitals that were set up on Lemnos in Greece, where again supplies are inadequate, although the drunken Colonel in charge has enough whiskey, and the nurses resort to tearing up their own aprons for bandages. Next is surgery in France and the hell of the Somme with the stench of gangrene and commanding officers who keep getting younger and where the nurses are recruited into anaesthetics.

The set by Tom Bannerman is utilitarian and works most effectively for establishing the various locations of troopships, battlefields, tent hospitals and even a road convoy in France. A simple sign is hung to indicate different locations.

Sound Designer Alistair Wallace has sourced appropriately scratchy recordings of songs of the era to be played at times of relaxation and fun, and the stable items of a hung canvas, several stretchers, wooden crates, some kerosene lamps and some authentic props are easily manipulated by the attractive ensemble of 3 male and 3 female actors.

Some props present their own significance. A Princess Mary tin is given to Florence by Lieutenant William Davies, (Gareth Rickards) for her to keep the most precious commodity of all in war time,– letters from loved ones at home and at the front.

War is a time of heightened emotions and hence strong friendships, loyalties and romance are inevitable. A good sense of humour helps as well. All of these are woven into the fabric of the story and so sensitively presented that our emotions are engaged, seemingly by stealth.

I was shocked by my own powerfully emotive response to Florence’s own heartache. I was also moved by the historical reference to the poppy, the symbol of soldiers’ blood, found growing in a fallen soldier’s Helmut and sent to Florence in a letter.

The ensemble, which also includes Rebecca Barbera as Florence’s fun friend, Sister Mary Douglas and Christian Charisiou as Private Harold Jenkins, are an experienced, energetic and talented team who, under the firm hand of director Mary-Anne Gifford, transform with skill and ease into various minor characters with a range of accents.

THROUGH THESE LINES is in its last week of an extensive tour that commenced late July, playing in venues throughout NSW such as Fort Scratchley in Newcastle, Trial Bay Gaol in South West Rocks and the Lithgow Small Arms Factory Museum. The Australian National Maritime Museum fits well in this catalogue of venues.

There wasn’t a huge audience on Friday night and a few people commented that the production was 20 minutes too long and could easily be shaved from the current 85 to 65 minutes. Given that the 100th ANZAC anniversary is next year, a shortened and streamlined version of this well researched, highly informative, emotive and significant production would be of enormous value and could appeal to many interest groups and educational institutions as they prepare their memorial services, ceremonies and educational programs about ANZAC traditions.

It would be a perfect way to present the history of ANZACs and WW1 to school students. It is a ready market and I sincerely hope that Turnaround Productions and No Rest for the Wicked find a way to continue to share this valuable story at a time that it would be most appreciated.

THROUGH THESE LINES will be at the Australian National Maritime Museum, Darling Harbour until Sunday October 5.