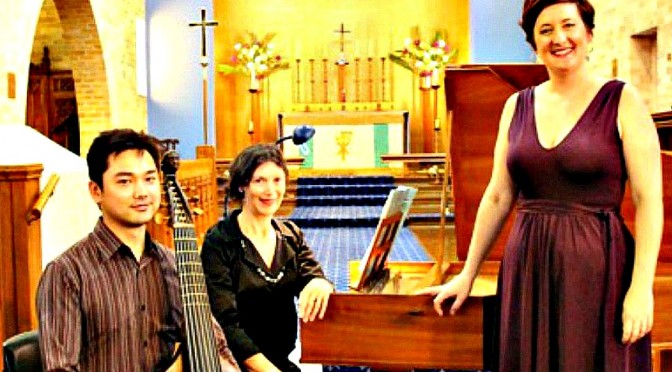 This concert joyously adhered to its advertised French theme. It celebrated the instrumental and vocal music composed during the rule of Louis XIV. The audience was introduced to a range of interesting works from lesser known composers than the often heard greats of the seventeenth and eighteenth centuries. The programme was well constructed to provide constant variety of ensemble and style.

String player Shaun Ng and vocalist Anna Fraser brought to the afternoon their experience, solid musicianship and exciting attention to performance practice. The balance with harpsichordist Diana Weston was always well suited to the dance or vocal works filling the church acoustic.

Dance music was celebrated on bass viol with harpsichord accompaniment. There was one by Boismortier with a mammoth nine movement structure and an earlier suite from Caix d’Hervelois. Shaun Ng excelled in defining the dance styles in each suite and promoting the attractive capabilities of the bass viol.

Ng’s phrasing, articulation and embellishment flowed energetically and contained eloquent freedoms and expression. The dance music presented showed admirable clarity of line, tone and rhythm as his period instrument provided a sunny atmosphere with fleeting but effective shifts to a darker tonality and mood.

Interspersed at satisfying points amongst the instrumental items were two brackets of vocal music featuring Anna Fraser. These were accompanied by Diana Weston on harpsichord and Shaun Ng’s talents on viola da gamba or baroque violin. Fraser’s interpretations contained a beautiful feel for word painting and a fine rendering of the period French poetry.

Her first bracket presented Louise-Maurice de la Pierre’s cantatille, ‘Danae’. This was a dramatic performance which rose to the greater meaning and mythology in the text. Text repetitions set to repeats of music or new material were well highlighted by Fraser.

Diana Weston performed an interesting harpsichord work, ‘Jupiter’, as published by Jean-Baptiste Forqueray (1699-1782). This was a fine instrumental interlude, demonstrating much of the arsenal of keyboard gesture, effects and bravura available to forward-looking instrumentalists, improvisers and composers of the day.

TOUT FRANCAIS succeeded in offering its concert audience an elegant and authentic sample of a productive and sunny time in music history. The fine setting and acoustic of St Luke’s church assisted with the clear delivery of the programme’s ideals and admirable architecture. This Thoroughbass concert was performed for one afternoon only, on November 16, at the St Luke’s Anglican Church, Mosman. It would, however, have no doubt continued to delight if taken on a small tour to other locations and intimate venues.