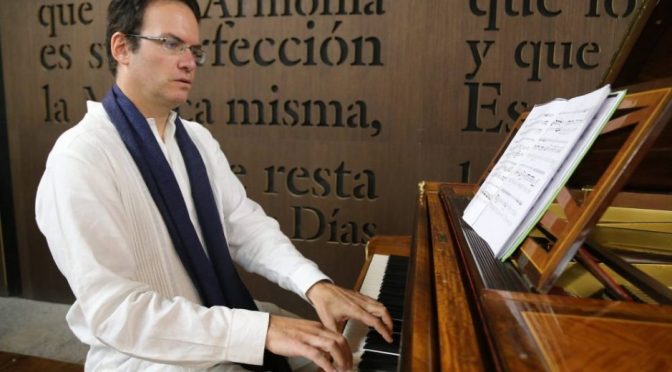 This was a very charming and delightful concert performed with delicacy and vigour. There was fine ensemble work by all and some dazzling harpsichord playing. Under the direction of Diana Weston we were privileged to welcome the return of Michael Tsalka on harpsichord.The program featured six short works. First we heard the elegant, quite operatic Johann Freidrich Fasch’s Overture arranged by Stephen Yates. This piece was stately yet lyrical and at times very fast paced.

Next was Vivaldi’s Violin Concerto RV 319 arranged for two harpsichords in three movements again arranged by Stephen Yates. The first movement began with a fast and insistent feel, one harpsichord acting like the violin soloist, the other the orchestra in a delightful dialogue between the two.

The second movement was more heartfelt and sorrowful, melancholic and reflective– however this changed to cascading, shimmering, faster, rippling notes on the keyboard taking us through to the third movement. This was an animated discussion between the two harpsichords full of crystalline delicacy and circling rhythms that led to a bright, powerful conclusion.

Scarlatti’s Concerto 111 for Harpsichord and Strings arranged by Ottavio Dantone was next. This had a rich, luscious and pulsating opening with a warm tone. Weston on the harpsichord floated through the strings. The second half was brighter and more energetic in atmosphere, with the harpsichord as soloist and the strings answering and commenting.

A highlight of the concert was the ravishing Benda Concerto 1 for Cembalo which was exquisite. The strings played with zest and we were off to an emphatic, energetic beginning. Tsalka was the featured soloist on harpsichord (discreetly accompanied by Weston) and featured a breathless, rippling, showy section full of refinement, precision and filigree elegance.

The second movement featured sorrowful strings and flowing keyboard, and was quite operatic in style (think Gluck/ Handel). Tsalka on keyboard had a soaring lyrical featured solo which was followed by the strings undulating in and out underneath the harpsichord music.The third movement had a boisterous joyous opening which was followed by a showy solo for Tsalka and concluded with some animated dancing between the strings and harpsichord.

Vivaldi’s Violin Concerto RV 229 arranged for 2 harpsichords by Stephen Yates was next in a breathless yet stately performance that rippled and cascaded in an animated discussion between the two harpsichords in the first movement. The second movement was slower and more reflective, the third emphatic and scurrying featuring showy flourishes by Tsalka and then coming to a bright conclusion.

The final piece was Bach’s Harpsichord Concerto IV BWV 1065 with 2 Violins, Viola und Continuo. The first movement featured a lush, vibrant opening and warm, pulsating strings. The second movement was an aching melancholy lament  with Tsalka’s playing soaring in and around the strings. The third movement was bright and bouncy and took us to the end of a very enjoyable concert.