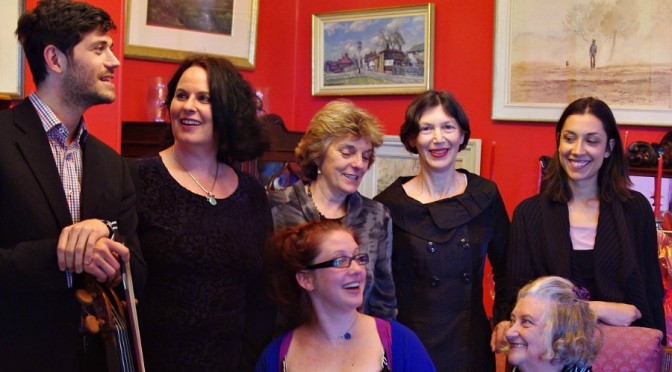 The ‘Flying West’ concert was a culmination of two years’ hard work in which compositions from the 1970s by Ann Carr-Boyd were introduced to a modern audience. The works have been recently published and recorded, as well as the majority of them programmed in this diverse and captivating performance event.

An exciting snapshot of richly creative and individual compositions was supplied, and the concert had pleasing momentum. The performances by Diana Weston and Thoroughbass of these interesting works made for an entertaining concert experience in the bright acoustic of the Mosman Art Gallery hall.

The programme also included a new commission, “Flying West”, written in 2014. The composition, responding to a poem about the work day of the Flying Doctor staff, has been scored for harpsichord, recorder and cello. The intimate tone colour combinations and highly evocative gestures of this new piece reflect the earlier works, whose ingenuity avoided the dissonant avant-garde manipulations of the era.

Anyone hearing these collected works live or on the new ‘Flying West’ CD on the Wirripang label will be struck by the style shifts between or within works. The three brackets of folksongs heard in this concert are a fine example of such contrast. Whilst presenting folksongs from five countries, the seven members of Thoroughbass played a collection of percussion in addition to guitar, cello, violin, recorder, voice and harpsichord.

All but two of the folksong arrangements included voice. Soprano Danielle Grant was a stunning performer of the texts in a range of languages. Although the programme notes didn’t extend to translations of the lyrics, the distinct flavours of each song were instantly captured by Danielle Grant, and well contrasted. Grant’s wordless, expressive vocal contribution at times in the folksongs also added to the soundscape of ‘Catch 75’, where such an impressively performed layer enhanced this exquisite piece with its references to indigenous music.

A break in the full ensemble texture came with the beautiful work ‘Nadir’ (1973) for violin and harpsichord. Tara Hashambuoy’s string playing possessed directness and clearly outlined the myriad of shapes in the score. Combined with Diana Weston’s well-managed variety of contemporary harpsichord effects, the overall result made this a standout piece and moment.

The harpsichord was also showcased in the solo piece ‘ITT’ composed a year later. This piece’s inclusion highlighted Ann Carr-Boyd’s innate ability for variation. The music from TV’s ‘The Addams Family’ was pleasingly familiar. The clever thematic development was given great characterisation in Diana Weston’s performance.

The multi-faceted ‘Flying West’ project contributes significantly to the preservation of Australian composition. All works recorded on the companion CD, including those not able to fit into the one concert, have been typeset by Stephen Bydder from Carlisle Print and Publishing. They have been attractively published as separate performance-ready pieces by Wirripang Pty Ltd, who specialise in publishing Australian music.

This substantial concert by Thoroughbass celebrating the works of Ann Carr- Boyd is also well supported by a double CD to further enjoy the new and revived works we have been exposed to in the concert. The practical option of clear new scores to ensure the works are accessible is an important addition to the canon of Australian Music literature.

The ‘Flying West’ concert played the Mosman Art Gallery on April 19. Thoroughbass for this project consisted of the following performers: Janet Agostino-guitar, Jo-anne Arnott-recorders, Danielle Grant-soprano, Tara Hashambuoy-violin/viola, Angus Ryan-cello, Diana Weston-harpsichord and Rita Woolhouse-cello. This concert can be heard in Canberra and Burradoo in May.