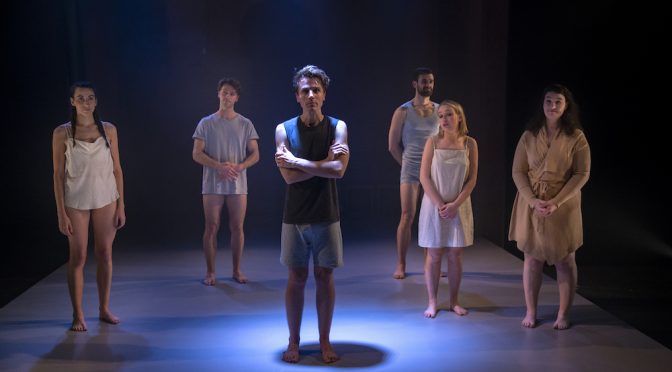 Firstly, let me quote from the NewTheatre’s own website, which describes the play accurately:

“Dating apps, capitalist nightmares, a rental market we’re not invited to and a semi-constant state of existential terror – look, we’ve only got 12 years until climate catastrophe; might as well flail around in a spin class and buy a reusable straw.

“An unstitched patchwork of queer lives in queer times, THIS BITTER EARTH  looks at how we fight, bitch, love, confront despair and try to connect, all through the mess and the muck and the might of everyday queer existence.

“It’s vicious, it’s tender, it hates being touched but it kinda needs a hug. It’s an anthology of millennial crises, from drunken wine nights in dirty hostels to desolate wastelands at the end of time. And it’s gay. Really gay.”

The New Theatre has brought us yet another brilliant and evocative offering with this new work. And good on it for doing so. Whether presenting an old standard, such as Pygmalion or a new and original one like Chris Edwards’ THIS BITTER EARTH,, a visit to the New never disappoints.

Director Riley Spadaro has been lucky in being able to gather such a splendid cast together for this piece. Highly experienced, dedicated and thoroughly trained, each one obviously knew that they would really have to blend with each other to make this show believable. This they did with great acting and superb dedication to their craft. It was apparent that director and cast were on the same page, and I’m not talking about the script here. I believe that the cast contributed a lot of their own ideas in the development of their individual characterisations, which certainly worked to achieve an overall believability.

The play is essentially a collection of six different stories, and is told by six different people. I would normally refer to them as ‘characters’, but, to me, these are not ‘characters’ as such. These are people – real people. Their emotions are real – naked and unadorned. And it was obvious that several of the Thursday night audience saw some of their own life experiences reflected during the various stories related as the action of the play progressed.

The cast, and the ‘characters’ were in their early twenties, as were the majority of the audience. But even the older patrons seemed to be thinking back on the time when they were younger and lived through their own similar experiences. Though unrelated, there was an unspoken connection with each different story as it was related.

Each scene was played out in different ways and by differing numbers of players. The opening monologue set the scene of what was to follow. Other stories were told by only one player; others by two; and one scene was played out by the entire cast. All six gave a collective epilogue at the end of the show. This clever author, Chris Edwards, has certainly given us plenty to think about.

CAST (In order of appearance)

Matthew Predny – One / Jake / Someone

Sasha Simon – Charlie / May / Someone

This is the world premiere of this new Australian play, which was developed by the writer while undertaking his Masters of Writing for Performance at NIDA in 2018.