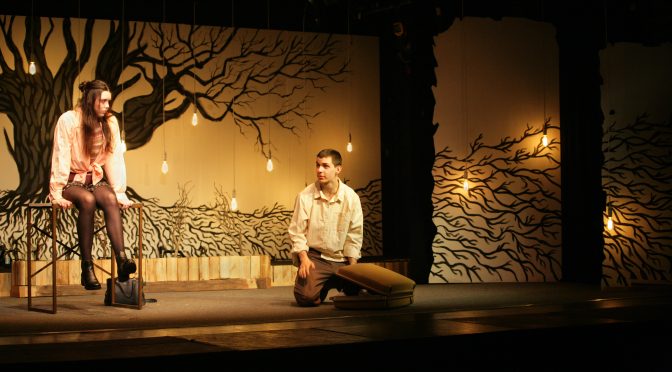 Many years ago now, as part of a Sydney Festival, I saw a play put on  by the highly regarded British Theatre Company Theatre De Complicite, directed by Artistic Director Simon McBurney, called ‘The Street Of Crocodiles’.  It told the harrowing story of Holocaust survivor Bruno Schulz.

At the play’s end, Bruno Schulz’s body was lifted up and carried,  and soothed, from one character to the next, across the stage.

Bovell ends his play in a similarly tender and emotive way.

There is no specific predicament to this Andrew Bovell play, one of Australia’s leading playwrights. What Bovell does is follow the lives of the Price family over a year, charted over the four seasons.

Carla Moore’s direction is assured and she comes up with a non naturalistic set design of a large tree, perhaps a family tree of the Price family, with its roots/tendrils extending in every direction. Wal Moore  lights the stage well. The haunting melody of a Leonard Cohen song played by solo piano, sorry I am not well versed enough in Leonard Cohen to know which one, cast a  long shadow over the play.

One feels for all six of the characters and what they go through.

As the father Bob, Ian Boland was an old style, good natured man who finds it hard to deal with the changes that his children are going through. He has himself  gone through a major life change as her had recently retrenched from his job.

Julie Moore plays the mum Fran and  she displays the different shades in her character well. Fran still, after many years, works  long hours  as a nurse.

All four of their children, in different ways, cause their parents a lot of concern.

Freya Moore  is Rosie who leaves Adelaide suburbia with a great sense of adventure, ventures to Europe but after her heart is broken  by a narcissistic man,  returns home scarred, coming back to the safe haven of the family home.

Georgia Britt plays daughter Pip who breaks up a marriage with a loyal partner and loving children to go and live in Vancover for an undisclosed reason. Fenech’s performance conveys the anguish that his character feels.

Gianni Fenech  plays Mark who has struggled with his gender identity for a long time and reaches a decision with major consequences.

Jordan Andrew plays Ben who is envious of his middle class friends  and chooses a devious path to keep up with them.

Verdict.  There is plenty of TLC shown in Moore’s fine production of Bovell’s well crafted and poignant play.

Recommended, Andrew Bovell’s THINGS I KNOW TO BE TRUE, directed by Carla Moore, is playing the Theatre On Chester, 6 Chester Street, Epping until Saturday May 14 2022. Check the website for performance times.

Featured image :  Freya Moore as Rosie and Gianni Fenech as Mark in Andrew Bovell’s THINGS I KNOW TO BE TRUE