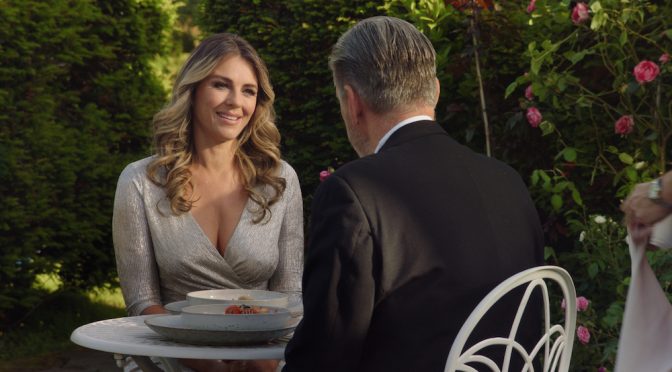 In difficult times, a predictable, corny, feel good middle-aged, middle to upper class romantic comedy may be a good antidote. Without any significant graphic sex or physical violence, THEN CAME YOU, with its travelogue style Scottish countryside scenery, promises a pleasant 98 minute sojourn.

American Annabelle Wilson is suddenly widowed after a 32-year marriage to her husband, Fred. They have lived in Nantucket, the entire time, running their hardware store and going to the movies every week.

On reading his will  she discovers that upon his death he wishes to be cremated and have his ashes put in ‘a box of chocolates’ because Forrest Gump was his favourite movie. She determines that “I’ve got to make new memories, or the old ones will kill me. And I’m not ready to die yet.” She makes a list of their favourite 20 movies, sells their house and the hardware store, and leaves her life in Nantucket behind. She travels to Scotland first, in honour of ‘Braveheart’.

Like Annabelle, the viewer is seduced by the awesome beauty of the Scottish countryside. Reynaldo Villalobos’s cinematography splashes the canvas with sunlight, then raindrops and rainbows.  We are aware that this country is going to have a significant impact on her.

In Loch Lomond she checks into an inn owned by, and operated, by a crusty, weathered Scotsman, Lord Howard Awd. Polar opposites, Annabelle and Howard spend one week discovering secrets and they develop a friendship. The publicity poses the question, Will it lead to a last chance at love for both of them?’ There’s a complication: Howard is scheduled to be married at the end of the week!

Lord Howard Awd, played by Craig Ferguson, has a scruffy, uncouth country style. Though he’s titled, we discover that he isn’t rich and is having trouble keeping his property financially afloat. A solution to address his fiscal problems may come with the prospective marriage to his fiancée, Clare Hollings, played by Elizabeth Hurley, a self-centred society girl.

Howard’s closest friend is the inn’s handyman/butler Gavin Ferguson, played by Ford Kiernan. Howard has a 29-year-old son named George, played by Calum Chisholm, who disapproves of Clare so much that he refuses to attend the wedding.

When Annabelle meets Clare in person, Clare is predictably dismissive of Annabelle and treats Annabelle as a lower-class guest who isn’t worthy enough to be socialising with Howard. Howard has other flaws – often showing signs of dishonesty and disrespect about women, and classist attitudes are often shown.

Director Adriana Trigiani ensures that the movie has many moments of tension, as gender, class and culture clash. Bawdy jokes play on the differences between US and UK English expressions. Contrasting moods of the actors play out against the natural backdrop of the countryside. How much Howard and Annabelle actually do have in common is one of the later twists in the film.

Former TV talk-show host Kathie Lee Gifford wrote the screenplay and is a co-writer, with Brett James, of the movie’s original songs. Gifford also plays Annabelle and was a producer of the movie. Annabelle in the movie admits to having been an aspiring singer/actress, as was Gifford in real life before she became a TV personality. There is a sprinkling of singing in the movie, especially during a country pub scene.

THEN CAME YOU has a plethora of allusions to other movies, including that Annabelle is carrying her husband’s ashes in a box of chocolates, after ‘Forrest Gump’. The sex scene in the movie is implied using black and white earlier Hollywood styles.

Annabelle’s journey was to be a travel tale inspired by other movies so it is not surprising that THEN CAME YOU turns out as romantic and schmaltzy with beautiful cinematography. Since her plan was to visit 20 countries from 20 movies, the ending yields the prospect of sequels or being made into a series.

THEN  CAME YOU opens in cinemas on Thursday 11th March 2021.

Sydney Arts Guide has ten in season double passes to give away.  Email editor.sydneyartsguide@gmail.com with THEN CAME YOU PROMOTION in the subject heading and your postal address in the body of your email. Winners will be advised by email.