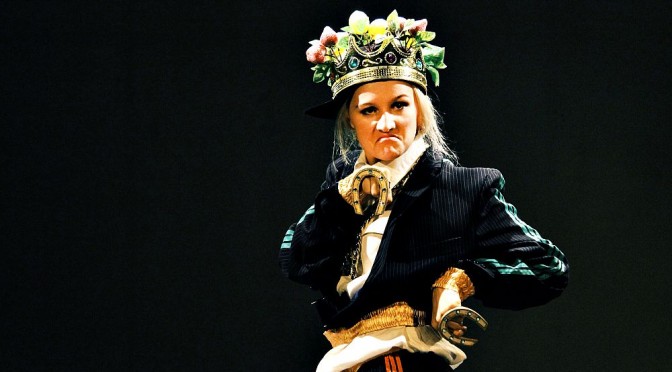 With her current play THEN, playwright Yve Blake  has tapped into the propensity that many of us have to look back, to reflect on how we used to be, before we became the people we are today.
Blake has tapped into this introspection in a major way. In late 2013 Blake created http://www.WhoWereWe.com/ an interactive website that asked people  from around the globe to contribute their stories, videos, playlists and photos of how they saw themselves. The  site is still on-going. So far people from over 154 cities around the world have contributed.
Out of this rich and diverse source of material Blake has come up with a vibrant, fast paced multi-media based show.   For much of the show she  stands in front of her laptop and presses the keys as quotes, images, video and more flash onto the screen. Behind her is a curtained partition  which she is often seen ducking behind  to change into various costumes and transform  into a wide range of characters/personas.
At other times, during the show,  she comes out from behind her tech hub and performances a range of songs and movement pieces that she has created for the show. She came across as a very natural performer, showed off a  clear as a bell voice and had some fun interactions with the audience.
Whilst the show was full of light moments my highlight was a very touching, personal song which she wrote about her relationship with her ageing, frail mother- “You grew me up, I will grow you down.”
Yve’s show drew very warm applause. After leaving the theatre, in the foyer, theatre-goers get  to browse across a large bulletin board which displays some of her favourite pics, quotes and drawings , adding another dimension to the experience.
To bring it all together, this was a fresh, inspirational show which Yve only recently performed at the Edinburgh Fringe Festival. It is very fitting that she has brought THEN to the ATYP Studio, where her theatre training began when she was just sixteen years old. She credits ATYP for being the reason  for much of her success and that it taught her that theatre can be anything that you want it to be, and that you can make it from anything that you choose to make it from .
Well worth a visit, the freewheeling THEN is playing the ATYP Studio 1 @  Walsh Bay until this Saturday night. Remaining performances are tonight (Wednesday) and tomorrow night at 7pm, and Friday at 11am and 7pm.