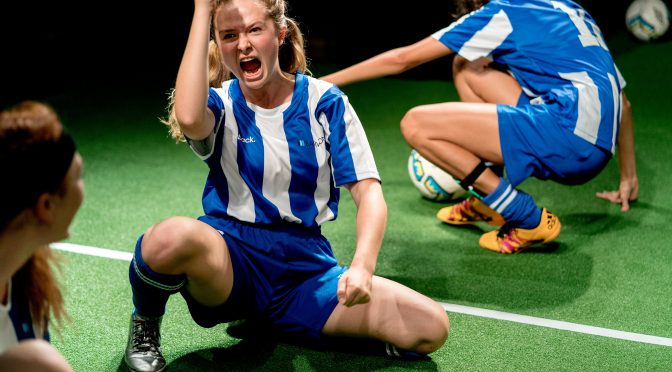 MICHELLE:           Yeah, we are in our third week now so we just have this last day of rehearsal and then we start our production week tomorrow.

MICHELLE:           The stage is a lot bigger so we have heaps… a lot more room to play but there have only had to be small tweaks so it’s not that much different to our last time.

MICHELLE:           Personally, I picked up again during the new rehearsal process, I didn’t need to practise as much as I did in the last season.  When we have spare time, I think we all just play around and juggle with the ball.  But the first time we went round we were all really particular with how to kick the ball, really getting with the foundation skills of soccer.  This season we have just picked up that and are concentrating on doing drills and drills.  Getting our fitness back up is a big thing as well.

MICHELLE:           Yes yes it is and we get very sweaty.  But it’s also very satisfying, I love to see actor sweat on stage.  It’s very satisfying to work through the whole play and get exhausted and, in my experience, you don’t get that a lot.

MICHELLE:           There is a lot of talking but we always have to be moving, doing our drills, stretching at the same time etc.  But in our rehearsal process we went lines first, having each particular line coming at a set time and there are also different conversations happening at the same time.

And then we put in the physical aspect of that  so we had to put in the second layer of talking at a particular time and where are we in the space and then put the two things together.  Which is a bit of a mind jumble.

So just now, we were working on a drill called ‘the spider web’ which is a quite complicated soccer drill while we are still talking at the same time.  When you leave the circle say your line straight away because of the timing when you finish that.  We have to do it at least once a day.

MICHELLE:           Yeah exactly.  It does feel like that.  I  mean you can’t hit the ball hard when there’s a really important conversation that’s going on so what can we do that’s a little bit quieter but still looking like actual soccer players not choreography.

MICHELLE:           It’s very particular in the way that it’s written and Jess (Director Jessica Arthur) is very strict about having the exact line in place. But I think because we are quite young, personally, I found it quite easy to go back into that teenage speak but there’s also that line … you can’t make them sound ditzy or unintelligent.  Because young women these days are really smart but have this irreverent language, which is what I love about teenage girls … they can say huge things, political things in an irreverent way and then just move on.

SAG:                      And that fact that these girls don’t have names, are just known by their numbers, confronts our perceptions straight on doesn’t it?  What number do you play and what is her story?

MICHELLE:           That’s right.  I play #14.  She’s a midfield.  She is described in the character description as an insecure sidekick to #7.  7 is striker, the only striker in the team, she’s not exactly the mean girl but she holds a lot of power and status and we’re always hanging out together and during the course of the play we have our own journey of what we do together and then there’s a conflict.

MICHELLE:           (Laughs) Sure.  It started with DRY LAND (SAG Review).  I feel like we don’t experience the competitive side as much here and in New Zealand but in the US sport is a massive thing for young people.  Because you can’t afford a college, it is way too expensive, so the way that they get into good colleges is through sport.  They get a scholarship through a sport.

This comes up in the play where one of the characters is … we need to win this season because scouts are coming and it’s our way in to get a higher education.  Because if you don’t get in your future is on the line.  So that comes up a lot and we have had to push that because new Zealand and Australia are modest sort of people and there’s the tall poppy syndrome and so our competitiveness has to be at the fore-front and we have to be non-apologetic as well.

Even the way the Soccer competitions and championships are heaps different to my experience of playing sport which is more casual and doing it for fun.  In the play you want it to be your career, you’ve been doing it since you were four years old, it’s your way, your future.