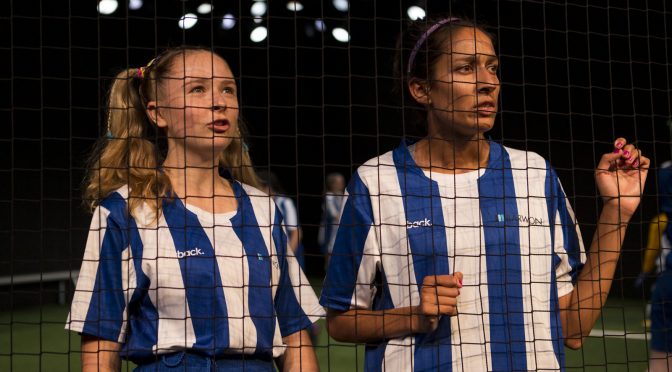 Whilst it is a sports story, the focus is more personal as we  get to know each of the girls, and their issues. For example, there’s the goalkeeper suffering from high anxiety who isn’t able to open up to the group and spends a lot of time rushing to the toilet to throw up..

Design wise, Maya Keys stage mimics a soccer pitch with artificial, tufted grass and a white line marking a boundary line. There are two long benches for the players to sit down on. There is also stage wide goal netting which takes us further into the world of the play.  None of the cast actually directed a ball into the net which was a relief for those sitting in the front row,

The action of the play unfolds with the girls doing their warm up drills, sometimes just at training, other times on match day, after which we see them run out onto the pitch, as  we see them dart down the middle aisle to the actual game which always takes place off stage . One couldn’t help but be impressed by the fitness, flexibility and athleticism of the cast.

The girls discuss everything including their take on the latest social  trends and world news.Sometimes the talk becomes personal and feelings are frayed.  The differences in personality come through clearly in the performances of Sofia Nolan, Michelle Ny, Cece Peters, Nikita Waldron, Brenna Harding, Emma Harvie, Nadia Zweker, Sarah Meecham, Renee Lim and Chika Ikogwe.

Verdict. In many ways this play was a great exercise in how simplicity can work. The action of the play revolves around the warms up and routines of the players and the dialogues and storylines  that result. The play was a well directed- Jessica Arthur– and performed slice of life drama with some heightened moments. How often it is friendship, sharing, and  camaraderie that keeps us going, even more so after harsh reality bites. It was good to see strong, intelligent, independent, articulate young women presented on stage. Also that the play has been put together by an all female cast and creative team.

Recommended, Belvoir Theatre’s presentation of a Red Line Production, Sarah Delappe’s THE WOLVES is playing upstairs at Belvoir Street until the 3rd March.