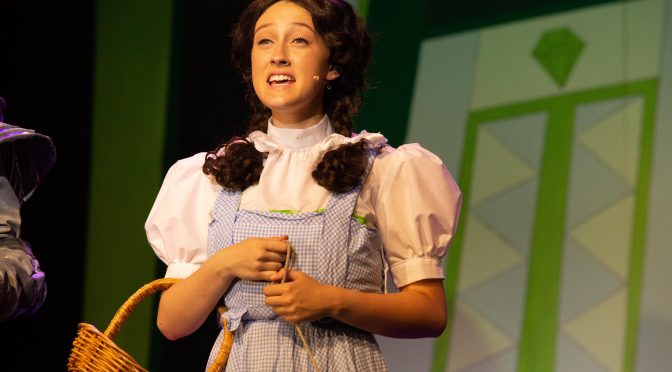 As family shows go, this is one of the best as demonstrated by the many  families enjoying this matinee performance.

I’ll be short with the scenario as most readers will be familiar with it.  When a tornado rips through her home town if Kansas , Dorothy and her dog, Toto, are whisked away in their house to the magical land of Oz. They follow the Yellow Brick Road toward the Emerald City to meet the Wizard, and en route they meet a Scarecrow that needs a brain, a Tin Man missing a heart, and a cowardly Lion who wants courage. The wizard asks the group to bring home the broom of the Wicked Witch of the West to earn his help.

This was a very polished and fun loving production. Everything worked well; the sets including  a back wall screen which displayed computer generated images, the costumes were vibrant, the show tunes were performed with style and passion. There were many highlights. I enjoyed especially the If Only songs- If Only I had a heart’, ‘If only I had a brain’, ‘If Only I had the nerve’, ‘If I were King of the forest’.

The creative team were in top form. Carina Herbert  directed the show with aplomb with musical direction by David Lang of a very fine orchestra.  Donna Brotherson was in charge of choreography and Anthony Halpin was the set designer.

Recommended, THE WIZARD OF OZ is playing Rockdale Town Hall until 17th March, 2019. Check the website for performance times.. The remaining performances are daytime performances.