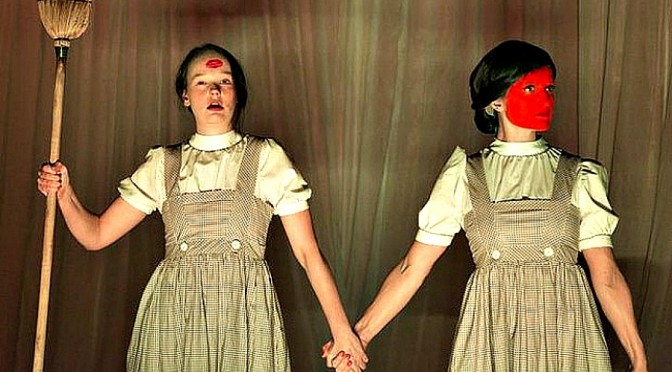 Wizard of Oz director Adena Jacobs explicitly stated that this adaptation was going to be a significant departure from previous, sunny side up versions, still, Wednesday night’s opening night was even for Belvoir standards an eye-opener.

The beauty of this adaptation is that the real meaning of the play is entirely dependent on each individual in the audience and is subject to different interpretations. The journey that women make from adolescent to woman is a central theme, and how frightening it can be to feel powerless in new environments. Young women aren’t always necessarily powerless though, they just  sometimes need help and time to learn how to wield their power. Dorothy is bestowed great power on landing in Oz, in the form of the ruby red shoes, but she must learn how to harness this power, to best unleash it.

The play featured striking imagery and reworked some of the more iconic scenes, however the dialogue-light performance will disappoint some. Having come to the theatre from a literature background, I myself like a text-based performance.

The dream-like quality of this performance was challenging at times, though the dream had many nightmarish qualities which certainly livened things up. The Scarecrow is dressed innocuously enough in a dress, but wears a fright mask worthy of a true horror film. The Tin Man is played by the bizarrely attired Jane Montgomery Griffiths and the Lion is played by Paul Capsis, who impresses with a stirring rendition of ‘I’m always chasing Rainbows’.

At the play’s conclusion Dorothy dons the witch’s dress and wig and the witch (Luisa Hastings Edge) appears in Dorothy’s clothes in an intriguing role reversal. Perhaps this is a reminder that all women have elements of the witch in them, and are not compartmentalised so easily.

The part of Toto was partly filled by Lucky Jim, the dog of Ralph Myers and Brendan Cowell and his part was over too soon, though but he made a reappearance at the conclusion. A small army of wind-up dogs took over from Lucky Jim, though their appearance was a little baffling and felt superfluous.

The Scarecrow and the Tin Man needed much larger contributions to better realise the story’s potential, and the actor’s potential. Overall, though interesting, this production was more of a miss than a hit for me.

THE WIZARD OF OZ, after L. Frank Baum, is playing upstairs at Belvoirn Street until the 31st May.