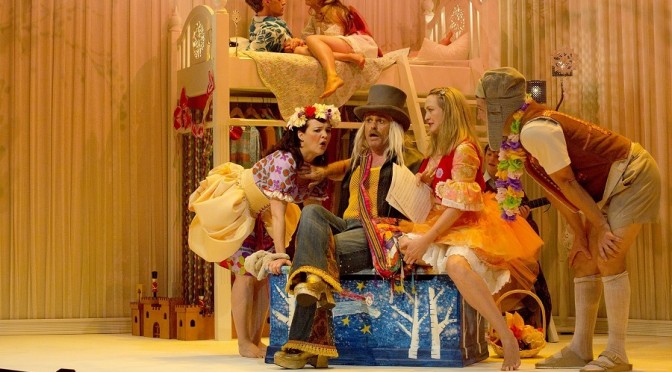 Enchanting atmospheric lighting by Matthew Marshall was superb. So before the play even starts there is a strong message that we are entering a place of dreams and nightmares ,of memory and imaging and of ‘let’s pretend’ . Mamillius’ continued presence throughout as guiding spirit and magician signals this production’s intent: it wants us to suspend disbelief, leave behind the everyday, the logical and the rational and succumb to theatrical magic.

As this is Shakespeare, cuteness, however does not really apply, particularly in this rather awkward at times play , with its combination of madness and lyrical/pastoral scenes , searing, intense emotions and joyous young love. Mamillius dies of a broken heart in Act1 ( in this version, reported off stage ) having seen his father Leontes, King of Sicily (Myles Pollard) insanely consumed by jealousy and obsessively believing that Queen Hermione (Helen Thomson) is pregnant by his friend Polixenes, king of Bohemia (Dorian Nkono).

His courtiers and even the Delphic Oracle’s insistence on their innocence only strengthen his conviction and Leontes orders the faithful Camillo (Philip Dodd) to kill Polixenes. Instead, Camillo and Polixenes escape back to Bohemia while Leontes condemns Hermione to a dungeon. There she gives birth to a daughter – who is taken away and abandoned to die in the forest … Act2 sixteen years later sees the unknowing Princess Perdita who has been raised by a shepherd fall in love with Prince Florizel , son of Polixenes .Can they be united ?

Lion-like , bearded Myles Pollard gives a splendid performance as the tormented Leontes. He is bitten and driven mad by jealousy and steadfastly refuses to listen to reason ( the pleading of his courtiers) in Act1. In Act2 he is full of remorse and repentance and won’t forgive himself. He handles the monologues and blustering terrifically and has a fine voice. He is also great in the comic role of the Old Shepherd who finds and raises Perdita.

Helen Thomson as Hermoine , the wronged queen , was superb .In Act 1 she is still weak from giving birth to Perdita but bravely makes a stand and protests her innocence. In Act 2’s reconciliation scene she is exquisite and it is beautifully, movingly done. And as daft Mopsa she is delightful .

Princess Perdita was enchantingly, exquisitely played by Liana Cornell, a fairytale princess indeed .She glowed and in the fancy dress party scene of Act 2 was appropriately dressed as an angel (Shades of Baz Luhrman’s R + J ? ) She is stunningly beautiful and a fine actress ,her character risking all for love.

Handsome Prince Florizel was excellently played by Felix Jozeps .He impetuously ignores for love what they think are differences in class and status until all is put right at the end . Polixenes was tremendously played by Dorian Nkono .He is charming and eloquent with a honeyed mellifluous voice .Yet he can be startlingly regal and authoritative too as we see when he unexpectedly turns on Florizel.
As Camillo, Philip Dodd has great fun in both acts and has much fun channeling his inner Sir Humphrey Appleby.

Terry Serio as Antigonus (in Act 1) is terrific .He is loyal to Leontes yet it breaks his heart to have to abandon baby Perdita.(In this version the famous stage direction ‘ exit pursued by a bear’ is very effectively done with a toy teddy bear and great use of shadows.) In Act2 as Autolycus he has great fun hamming it up as the thieving, lying,singing trickster.

Special mention must be made of the terrific performance by Michelle Doake as Paulina ( Act 1 ) /Dorcas (Act2 ) .In Act 1 she daringly stands up to Leontes and insists on Hermoine’s innocence , delivering a fiery, passionate version of the famous speech .As Dorcas in Act2 she leads everything towards the eventual happy ending .

In conclusion , to paraphrase what one of my colleagues has said – ‘Although a sometimes mildly confusing production of an often perplexing , difficult play, this is however a fine rendition of one of Shakespeare’s relatively lesser-performed works, well worth seeing for both its curiosity value and the many excellent moments of high drama from this excellent cast.’