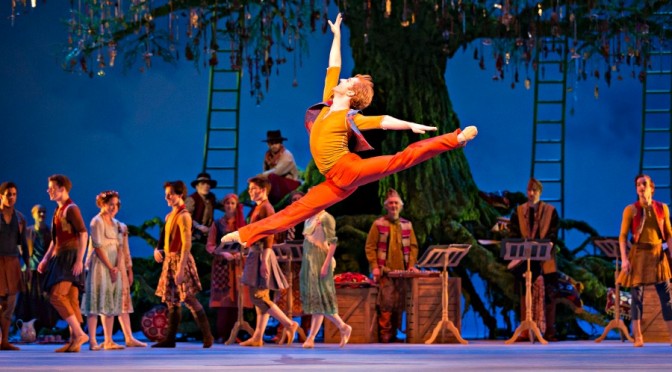 The main theme of the work throughout the entire production is jealousy , and compassion and forgiveness, but the usual stumbling block is how to portray this clearly and successfully on stage in dance – but in this case it really works. Wheeldon’s choreography is at times extremely athletic and demanding sometimes it appears that the dancers need to seem boneless! They also need to be able to be great dramatic actors.

The distinctions between Sicilia and Bohemia are clear choreographically, musically and visually. In Act2 special mention should be made of the on stage musicians under the wonderful tree. Joby Talbot’s rich, multilayered ,complex score is excellent in its rendering of many emotional tones for the various characters . Bob Crowley’s designs are exceptional and special mention must be made of Natasha Katz’s superb atmospheric lighting and also the projections and silk effects designs that are magnificent .

There are glorious sea and ship depictions , the huge, sprawling tree in Act2 is fantastic ( a fairy tree from ‘Midsummer Night’s Dream’ or the party tree from ‘The Hobbit’ perhaps ?) and the famous ‘ exit , pursued by a bear’ is quite terrifying and most effectively done with the billowing silk effects.

As poor wronged wife Queen Hermoine ,Lauren Cuthbertson was glorious , tall with a long ‘line’ that seemed to go on forever. At the opening of Act1 she was radiant , but then pleading and despairing .in Act3 she is magnanimous and forgiving .The ‘statue comes to life’ scene is extremely moving and there are some very demanding and athletic sections in the recognition/reconciliation scene between Hermoine and Leontes.

Loyal ,feisty Paulina was tremendously danced by leggy Zenaida Yanowksy . Her anxious ,angry mime protesting Hermoine’s innocence in Act1 was quite clear and she delightfully weaves her magic to put things to rights as much as possible at the end.
King Polixenes was regally, commandingly danced by Federico Bonelli .As the wrongly accused friend and aggrieved father Bonelli gives a tremendous performance.

Act 2 brings us our young hero , prince in disguise ( sound familiar? ) Florizel, wondrously danced by Steven MCrae .Mcrae is in astonishing top form and has some dazzling dangerous turns in his solos and partners Lamb as Perdita delightfully.

Princess Perdita, denied and abandoned at birth , is beautifully danced by Sarah Lamb. ( The baby Perdita I think was influenced by the New Adventure’s baby Aurora in Matthew Bourne’s ‘Sleeping Beauty’. )Lamb is exquisite – all dewy youth ,innocence and young love. She is radiant in Act2 being crowned May Queen and in her engagement celebrations , feisty and determined to survive shipwreck and separation towards the end of Act2/start of Act3. She is indeed a ‘lost jewel’ that shines brightly.

But this is Edward Watson as Leonte’s ballet – he towers above all in an incredible, shattering performance. He dances brilliantly but also gives an intensely detailed acting performance – we can almost hear him speak .

There is very effective use of close up photography , it is almost as if we are standing next to him on stage! In Act1 we see his unexpected descent into madness , in Act 3 his grief, guilt and shattered remorse and hopeful final redemption .Others have described hisperformance as reptilian but I would say more arachnid – inky , eerie , spiderlike…

A splendid full length new ballet of which the Royal Ballet should be most proud. It successfully melds traditional and modern, contemporary and classical ,abstract and narrative in a huge ,sweeping production that rivets and enthralls.

The Royal Ballet in ‘The Winter’s Tale’ is part of the Palace Opera and Ballet season and screens nationally at selected cinemas .