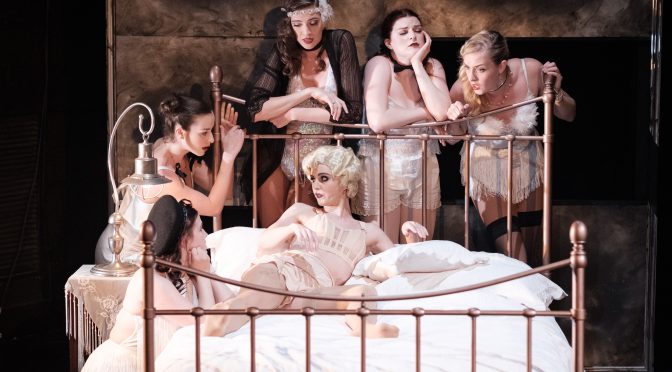 Little Triangle’s THE WILD PARTY has all the quality we expect of this emerging musical theatre company but with an added extra. There’s evident hard work in the mounting of the production, energy and commitment, excellent musicality and obvious drive to deliver exciting and interesting work to Sydney audiences. What’s different in this offering is the channelling of all that excellence into a focused theatrically in the movement and in the telling of stories.

And the story at the heart of this 2000 musical, music and lyrics by Michael J LaChiusa and book by George C. Wolfe is an interesting one. Set in the twenties, Queenie is the ultimate flapper, carefree and wild, despite a disillusionment with her boyfriend Burrs. His bad boy was once a magnet, now an increasing worry as his behaviours worsen. Looking to escape, the party to end all parties is called for and a bunch of misfit miscreants assemble for gin and dancing and other assorted abandonments.

This is a vibrant production in the beginning when the five Chorines, scanty clad, call, Big Spender style from the balcony to the audience before the show.  Their work will provide the dancing bedrock that makes this production so worth seeing and each of these performers is thrilling to watch.  Not that it’s all show and no tell.  Under the direction of Alexander Andrews the stage is rife with little stories to give an audience a depth of engagement that is needed in places as the text of the piece is very episodic.

It’s designed that way, with a vaudeville echo, but it can be very wearing on a modern audience especially as each of the many party guests has a song to introduce them.  The first act is enlivened by Andrews’s direction and Madison Lee’s splendid choreography but a lack of thrust early on during these quite long sequences didn’t hold my full attention to the main players.  There’s a lack of ascending excitement that can make the show somewhat flat despite the best efforts of a very good ensemble.

An ensemble with considerable depth and played with passion and character.  But the story belongs to Queenie, Georgina Walker. With a strong understanding of the visuals and surface of her character, Walker’s movement is calculated in style and effect with an eye to Queenie’s dramatic nature.  The audio on opening night was very, very disappointing and did a considerable disservice to her fine singing but Walker captured and expressed the complexity of her creation in a terrific performance with a brittleness in the gaiety that was particularly well explored in the soulfulness and sadness of the second half.

This production delves into that second act darkness and Andrews is unafraid of bringing the dysfunction of the motley collection together.  DV, race, sexuality and gender are touched upon without being overworked and the climax of the piece is affecting and emotional, allowing Walker’s fine performance to carry the pathos.

The music under the bow-baton of Conrad Hamill also utilizes underbelly tones in the very upbeat rhythms and tempi in a skillful orchestration of keyboard and cello mixed precisely with clarinet and sax and some very unobtrusive brushed drum.

The costuming takes a black and white palette and imposes some red and champagne on the black box.  The women’s look is exceptionally beautiful and period setting, perhaps the men’s costuming requires a more focussed detail, but one hardly notices with the spangles and fringes and furs catching the eye.  “Be nice, be pretty”.  The staging is uncluttered giving a freedom of movement which ties in with the themes and full rein for the lighting to create velvet shadows where dark deeds occur.

THE WILD PARTY is bursting with style and quality, especially in the dancing.  Put that cast in a flying wedge of Blackbottom and the floor shakes with a syncopation and hoofer pound of skilled feet that is nothing less that electrifying.   Add a sad little story and a luckless, conflicted anti-heroine and the stage is set for a very enjoyable night at the theatre.

Recommended, Little Triangle’s THE WILD PARTY plays until 24th November at the Seymour Centre.  You can read an interview with Choreographer Madison Lee here.