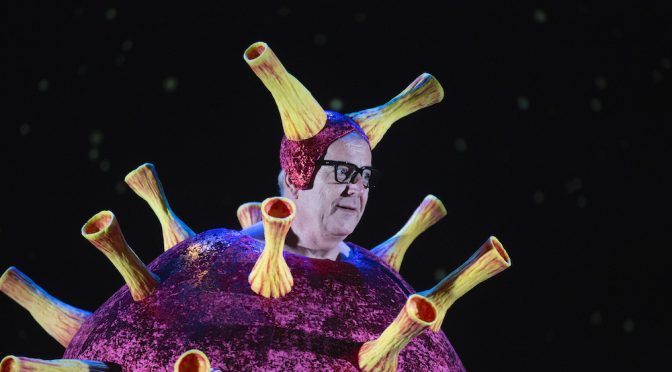 Shows can’t go on forever, especially ones  that maintain through their run a consistently high quality. At some point one has to ‘pull the plug’.

And such is the case now with the final season of The Wharf Revue which has been nothing short of a  cultural institution for many  Sydney theatregoers  over the past twenty years.

Where, exactly, does the time go?

I remember back in  1999, my God we are talking the last century, being invited to the Sydney Theatre Company’s (STC) launch of their 2000 season. Robyn Nevin was the then Artistic Director of the Company.

In one of the initiatives that marked her tenure with the Company, Nevin determined that it was time for the flagship State Theatre Company to have an annual revue show which would satirise the world of current affairs and politics.

Nevin chose a troupe of three fine satirists – Jonathon Biggins, Drew Forsythe and Phillip Scott – to put together the revue show. The group called themselves ‘The Wharf Revue’, named after the Wharf at Walsh Bay which houses the Sydney Theatre Company.

Over the years I have seen most of the Wharf Revue productions   including its inaugural production in 2000, humorously titled ‘The End Of The Wharf As We Know It’.

It is important to mention that every year the trio have added a talented female music theatre star, which has worked like a treat. To name but a few, Linda Nagle, Valerie Bader, Genevieve Lemon, Michelle Doake and Lena Cruz.

The Wharf Revue established its own unique formula/stamp; fast paced, clever, mischievous skits, often with the use of large screen pre recorded video, and plenty of music, mostly classic popular tunes which have been given new, pertinent, often incisive lyrics.

What has ensued have been shows that have been highly entertaining as well as being effective critiques of the politics and social mores of the time.

With the troupe’s wonderful gift for impersonation, so many well known identities appeared, often to much laughter, on the stage. Who could forget Jonathon Biggins as Paul Keating, which Biggins later transformed into his own one man show, Phillip Scott as John Howard and Drew Forsythe as Pauline Hanson?!

Pauline Hanson made an appearance in GOOD NIGHT AND GOOD LUCK, the troupe’s last show for the Sydney Theatre Company, Giggles in the audience broke out as Hanson extrapolated gibberish in ‘The Pauline Doctrine’.

For their final show their female companion was the super talented Mandy Bishop.

The show started brilliantly with performers dressed in full Covid cleaning garb rushing on stage to spray the stage. Then on comes a hysterically funny Jonathon Biggins dressed as a gigantic coronavirus – a great job done by the costume department. The often outrageous, extravagant costumes, makeup and wigs have been a highlight of every Wharf Revue.

What followed was another ninety minutes of fast paced satire featuring regulars such as Kevin Rudd and Gladys Berejiklian along with newbies such as Norman Swan who the team poked fun at for the innumerable times that he has appeared on television and radio as our coronavirus expert.

The team struck a sombre note with their scene, ‘The Sound Of Sirens’. Set to Simon and Garfunkel’s tune ‘The Sound Of Silence’, the big screen shows extended footage of the city of New York ravaged by the virus. This was such a good use of the power of pathos.

Now for a note to end on.

How will I best remember twenty years of the Wharf Revue?

For its edgy satire that made us take a hard look at subjects we would rather shy away from, and for their silliness, their creative zaniness, that always left us feeling  uplifted.

Fare thee well, the Wharf Revue team. Saying goodbye is so, so hard to do.

GOOD NIGHT AND GOOD LUCK is playing the Drama Theatre, Sydney Opera until Saturday 20th March, 2021. The show is then moving to the Everest Theatre at the Seymour Centre where it will play a season from Wednesday 24th March until Saturday 24th April, 2021. For this season David Whitney will replace Jonathon Biggins.