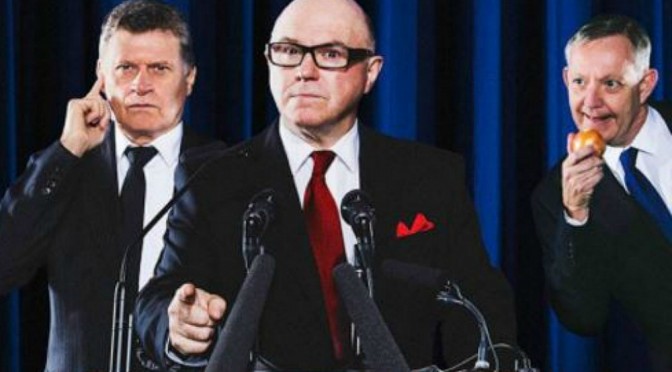 Written and created by Jonathan Biggins, Drew Forsythe and Phillip Scott, The Wharf Revue delves into the richly rewarding world of Federal politics to take the daft things our leaders have said and emphasise their ridiculousness and to twist the seemingly reasonable into fertile humorous material. They also throw in corny puns, clever puns, bawdy humour and some excellent musical numbers to entertain and amuse the crowd.

This year’s version also includes an international perspective. Donald Trump’s own words are used to pillory him and Brexit is given a “Carry On” interpretation. Jonathon Scott performed a number about France and terrorism. These segments were some of the weaker parts of the show. Trump’s own words have been widely reported so the material lacked freshness. The team did tie it into a fairly serious story about the politics of fear and what a tangled web the Republican Party has got itself into and then launched into 1950s style rock ’n’ roll number. The “Carry On” segment suffered from using a very outdated series and being true to the style of those movies. However the closing credits, projected onto the screen at the rear of the stage were very clever and very funny. The song about terrorism in France was disappointing as it seemed to trivialise such a tragic series of events.

I was seriously impressed by Katrina Retallick’s performance. Her singing is extraordinary. Her Jacqui Lambie is an eerily accurate representation. The routine with Jacqui Lambie and Pauline Hanson, played with scary aplomb by Drew Forsythe is sharply written and hilarious.

One of the most poignant and heartfelt scenes was a tribute to Bob Ellis, as he wandered around heaven with the other true believers, speaking with eloquence, complexity and potent observations. Contrasting the honour of receiving a, “Comrade, welcome” from Gough was the emptiness he was enduring being separated from his wife.

The various musical styles covered included some cheery reggae in the Disney on Isis segment, bouncy 60s pop with, ‘The Colour of Green is a Beautiful Thing’, jazz and blues. Phil Scott on piano is very impressive.

Jonathon Biggins’ rendition of Tonyus Abbottus doing a fan dance wearing only an item of clothing that should not be seen in a theatre, on a politician or generally anywhere is another very funny scene. Other characters to be pilloried were Kevin Andrews, Bob Katter, Derryn Hinch and Phil Shorten. These characters provide rich material for the teams’ satirists and comedians.

THE WHARF REVUE 2016 Back to Bite You is on at The Joan at Penrith until 27th August and then onto Parramatta and other venues.