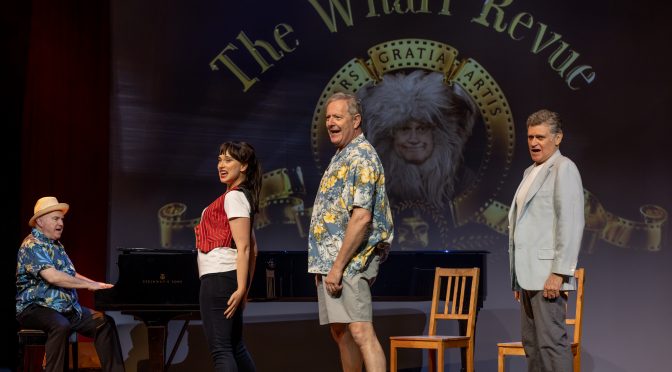 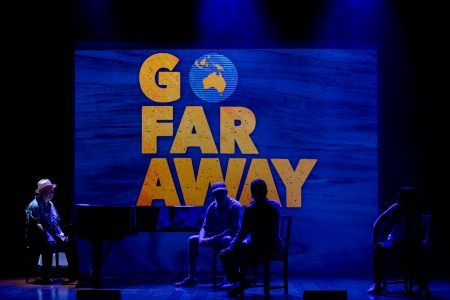 The hectic prologue song to this December’s Wharf Revue, Can of Worms, describes the offering rising triumphantly from the ashes of lockdown as a budget production. Budget has never looked so good, with the Review once again in the safe hands of these local satirists.

The chameleon cast are back, hell-bent on providing ruthless parody of public figures and musical numbers from classic shows such as South Pacific to more current once-cancelled theatre hits.

Phil Scott, Jonathan Biggins, Drew Forsythe and  Mandy Bishop are brave enough to open up the can of worms that is a tortured collection of not so stellar Australian and global politicians, all enjoying six degrees of separation from our Scomo paddling in his own little Banana Boat song-filled diorama.

The York theatre stage complete with piano and huge screen is used to good multimedia effect. The method of switching between streamed and analogue performance rivals any of our pandemic pastimes, such as our internet surfing whilst munching on tear-sodden sourdough toast. 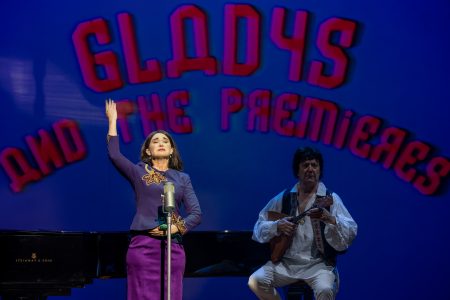 An infectious but controlled Facebook Live screen vignette of Mandy Bishop’s grinning, homely Jacinda Ardern still resonates post-performance to this day deep in my heart all this way over the ‘dutch’.

A Muppet Show  gallery of state premiers is another gem of a screen interlude. Other visual effect triumphs include a starry expanse of space as alien intelligentsia judge Aussie icons.  Also, a digital image from deep within a coal mine for Barnaby Joyce, George Christensen and the likes to prance in front of impresses greatly. It is a haunting reference to an industry cradled by political parents not vaccinating against greed and stupidity.

Audiences are sure to laugh hard through masks and rattle their chests as COVID-19 content is kept to a tastefully low case number.

Instead, large sections of the entertainment rely on dramatically altered, recycled songs from stage, borrowing especially successfully from Wizard of Oz, Come From Away, Sound of Music and South Pacific. These discuss in turn mortgage options, detention centres, Trump family values and right wing mateship with exacting, slick, triple threat ease from the talented cast. 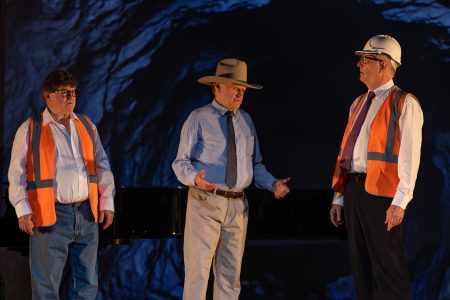 Above: Musical Director Phil Scott in an acting role down the mine with Jonathan Biggins and Drew Forsythe. Photo Credit: Vishal Pandey.

As master of the tight coiffe and tight-lipped malcontent, Drew Forsythe paints intimate and measured portraits of a disintegrating British Monarch and a matured One Nation senator littered with malapropisms. These are astoundingly penetrating likenesses, surpassed perhaps only marginally by the seething, surviving malevolence of Murdoch hissing Faustian hubris in an over-elegant salon.

This production is not isolated to fourteen days but pushes through for a good month. Tears of fraudulent joy will be shed as successive audiences watch a former NSW Premier wear her broken heart on a traditional folk costume sleeve. Mandy Bishop’s skil for adroit caricature also delivers a heart-stopping centre-stage tête-a-tête with Jaquie Lambie.

Jonathan Biggins’ explosive Cosmo Kramerish-haired Mark Latham is deliciously larger than life. The eloquence of this actor’s poetic tribute to a Xanadu-bound Xi Jinping’s challenge to democracy is a poignant moment of East meets West in Coleridge-tinted film sepia. This easily surpasses any chilling effect-saturated Instagram story we incessantly flicked onto before theatres reopened.

This much-needed, must-see continuation of the powerhouse, brilliantly-paced Wharf Revue legacy survives at the Seymour Centre until December 23. Leave your LGA in carloads to catch it.