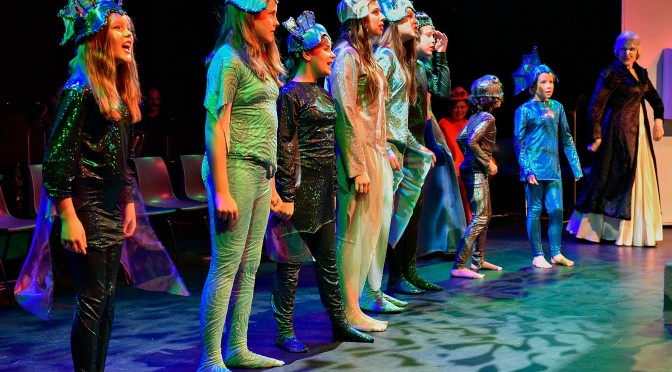 This was presented in a very impressive semi staged ‘’ workshop “ version of the amazing new opera composed by Freddie Hill based on the classic children’s book by Charles Kingsley.  The cast sat in rows of chairs onstage when not performing.

THE WATER BABIES tells the story of Tom, a persecuted chimney sweep who slips under the water.  The story comments on the harshness of Victorian society, child labour and the ethics of the time.

Musically it is contemporary is style and multifaceted. It includes elements of jazz, Victorian music hall, Sondheim, perhaps Sullivan and the atonality of Schoenberg. Some of it ripples and bubbles, other parts include lyrical ballads and exciting ensemble work. Hill’s wonderful score was energetically conducted by Rowen Fox, who also also had a minor acting role as Ellie’s tutor, and finely played by an excellent small orchestra gathered on the stage.

This production is well directed, finely paced and wonderfully lit by Kyle Stephens.

Sasha Cole as the young Tom was tremendous both as scruffy Dickensian urchin or in his green reflective unitard as a water baby. He sang terrifically and with great pathos and we keenly follow his character’s growth and development as he discovers love and compassion.

Jaye Hayward’s work as the older Tom is highlighted by his delivering of a riveting aria towards the end of the play.

The mysterious Narrator was thrillingly played by Carly-Anne Evans although at times she was drowned out by the orchestra.

Young Ellie was enchantingly played by Lucia Smith, who was splendid with a lovely light soprano – although this was perhaps a little strained in her big scene with her tutor featuring the ballad It’s All So Beautiful. As the older Ellie Charlotte Campbell was terrific. Campbell excelled in a long demanding aria at the close of the opera which brought everything  full circle.

The Water Babies themselves, dressed in fairy garb, were an enchanting children’s ensemble who sang delightfully. Skyelar Broxterman was dazzling and resplendent as a fragile dragonfly in Act 1.
There was also Elizabeth Hylton as Mrs. Doasyouwouldbedoneby , and Mara Kiek  as Mrs Bedonebyasyoudid  who emphasize the morals of the novel and watch over Tom’s development.

Under the water special mention must be made of at least the following :
The Otter was strikingly portrayed by Josephine Truman in a long, brown driving outfit, wearing goggles of the period, sleek and furred, and managed a quite difficult and spiky aria.

Lord and Lady Salmon were elegantly portrayed by Jaye Hayward and Kate O’Sullivan,  sumptuous in both voice and outfits.

I can’t possibly forget the wonderful, pompous rather ironic Lobster solo as portrayed by Samuel Johnson who was in splendid voice. As Lobster he wore a splendid mesh  like costume with a tabard over it and a terrific headdress.And then there were the Flamenco dancing crabs using castanets towards the start of the second half!

This was a very exciting workshop performance of Freddie Hill’s opera and hopefully we will see this work  get a fully fledged production sometime in the not too distant future.

Running time 2 hours 30 including an interval. THE WATER BABIES had one performance only at the Seymour Centre 18 June 2016.