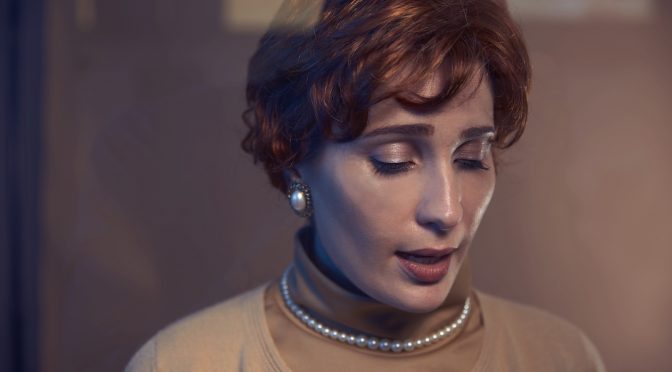 Eliza Jackson knew she was going to be a star even before entering her teens. Her show THE VOICE BEHIND THE STARS proves her prediction. This show is the story of Marni Nixon (1930-2016) who was the ‘ghost singer’ behind many leading Hollywood actresses in over 50 movies. Eliza holds the stage in this solo performance with her voice, humour and authentic story-telling.

Eliza focuses on the music and the story by using a simple set on a blackened stage. The set has a microphone and music stand representing the recording studio, an armchair, table, tea set and record player for home and a centre screen projecting images of the range of actresses whose careers Marni Nixon enhanced by giving them her voice.

Marni Nixon, endowed with perfect pitch, began singing professionally in her teens, reinvesting all her earnings in the early years in singing lessons. Whilst she did have some work doing her own recordings and some opera, it is her ‘ghost singing’ for which she is most noted. She has been described as ‘the best film diva you (almost) never saw’.

Many of her contracts forced her to remain silent about her being the real singer behind stars such as Debbie Reynolds and Natalie Wood. We gain insights into the talent and personalities of these and other leading actresses such as Audrey Hepburn, Deborah Kerr and Marilyn Monroe as Eliza interweaves storytelling with songs from My Fair Lady, The King & I and West Side Story to name just a few movies.

It was not until she was well into her twenties that Marni began her fight for and succeeded in getting the rights for all ‘ghost singers’ to be credited in the movie and to receive reasonable payment. Marni eventually did make it onto the big screen in acting and singing roles, including being cast in The Sound of Music as one of the singing nuns. Marni comforted herself with the success of three Oscar-winning films and the success of the leading ladies. She was also proud of the success of her three children: Andrew, an award-winning composer, Melanie and actress and Martha a psychologist.

Eliza Jackson writer, creator and performer of this show is an Australian-born, London-based actress and singer. NIDA trained, she is the Creative Director of UK-based theatrical production company Lambert Jackson.

Whilst Eliza too has been said to have perfect pitch, there are several humorous moments when she plays with various accents, personalities and class exaggerations which allow her to lower her musical guard. The story has enough of these moments and characters for the chronology to never become tedious. It is an absorbing tale. The overall message is bitter-sweet: “I’d let all these actresses dub their body to my voice”. The performance is one to relish.

During a successful sell-out run at the Edinburgh Fringe Festival 2018, the Edinburgh Guide described Eliza’s performance as ‘magnetic and magical’. THE VOICE BEHIND THE STARS is next playing at the Fringe World Festival in Perth daily from 10th to 13th February, 2019