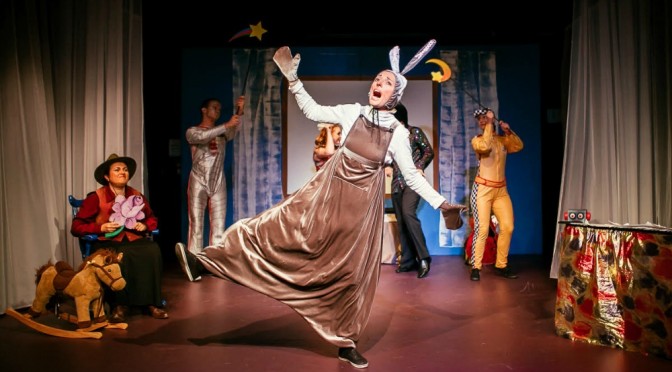 In the time-honoured tradition of the best children’s stories this is a very adorable and delightful adaptation of the children’s classic by Margery Williams first published in 1922.

With the show’s catchy singing and dancing this was perfect school holiday fare. Darina Vassiliev and The book has been updated- for instance, it now includes Elvis and a toy racing car adaptation, (the stage adaptation includes new characters including Elvis and a toy racing car), and co-direction of the piece works extremely well as does the original music by Elen Rapoport with lyrics by Vassiliev.

For those unfamiliar with the book the plot is as follows: A stuffed rabbit made from velveteen is given as a Christmas present to a small boy. The Velveteen Rabbit, after being introduced into the nursery, and at first finding it difficult to fit in, asks one of the wisest toys, his friend the Skin Horse, what being real means.”Real isn’t how you’re made,” replies the Skin Horse. “It’s a thing that happens to you. When a child loves you for a long, long time, not just to play with, but REALLY loves you, then you become real. It doesn’t happen all at once. You become …” And so begins the Velveteen Rabbit’s poignant story.

The show’s simple yet cluttered set features the Boy’s untidy bedroom, framed by dreamlike white curtains. Screen images and computer generated images are used to show the passing of the seasons as well as  the Boy’s outdoor adventures with Velveteen Rabbit.

The catchy music ranges from Elvis to waltzes and opera. The boy’s parents, the doctor, Nana and more are portrayed as unseen voice overs. Nana’s ‘tidying up’ is shown as terrifying for the toys, her vacuum cleaner ominously rumbling in the background.

The Velveteen Rabbit of the title was enchantingly played by  Darina Vassiliev, also the show’s director, who was adorable, sweet and gentle, with huge ears.

The Boy, the Velveteen Rabbit’s human companion, was well portrayed by Anton Mirvis, who at one point wore a Christmas t-shirt shirt and shorts, just right for the Aussie barbecue lunch he is called to.

Chris McInnes was terrific as Robot, rather stiff and slow, yet full of new ideas and self importance. His silver costume and makeup were very effective.

Samantha Camileri as the yellow racing car was speedy and dynamic, always wanting to be the fastest. It was great to see girl power in action!

Their tense ‘duel in song’, where the two eventually acknowledge that they actually complement each other and need the help of their other friends is great fun.

Amy Fisher as Crazy Doll, wearing a red floral dress, was delightful. She sang and danced well, pouting enchantingly and flirting unashamedly with Elvis. She had an Olympia like- think Tales of Hoffman-solo- with ‘The prettiest doll in the world’.

Older and wiser Skin Horse (here a rocking horse), who was already ‘Real’, was well portrayed by Louisa Raft as an ageing country farmers wife, wearing russet colours, and ever dependable. Raft has a great solo where she tells of her life and becoming ‘real’, and the accompanying music had strong hints of Bizet’s Carmen.

Toy Piano (the musician on keyboard) was quirkily played by Elen Rapoport as a cross between a magician and ‘Music’, with wonderful makeup/costume design, wearing a music clef on her face, and a large black and white scrolling keyboard on her costume.

The cute young furry real ‘rabbit, who rather abruptly informs Velveteen Rabbit that she is in fact not real, was sweetly portrayed by Nika Burlutskaya.

All in all, a poignant, timeless tale of love, friendship, honesty and acceptance. An enchanting show for all ages.

Running time just on an hour straight through.