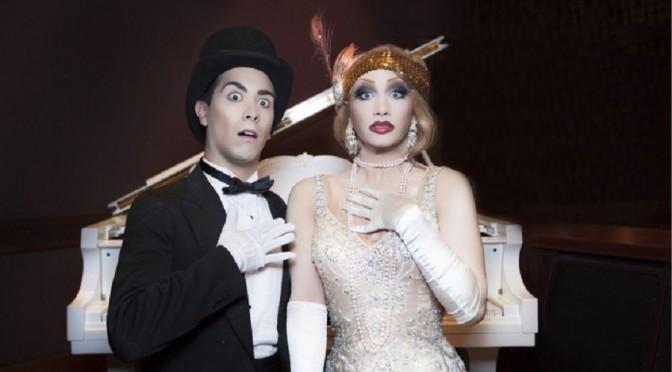 The premise is simple. Spouses Kitty Witless and Dan Von Dandy were accidentally frozen under a torrent of snow and cocaine in the 1920s, but were discovered and revived in our very recent times of global warming. Both happen to be brilliant performers, and have found their way to Sydney, just in time to present their show for the Mardi Gras season.

Cabaret is about performance. Stories are rarely important, but storytelling is everything. The Vaudevillians are played by Jinkx Monsoon and Major Scales, American artists who are truly of an “international standard”. Scales provides excellent support to his leading lady. He is superb on the piano, and the re-arrangements he has created are intelligent and delightful. The choice of familiar songs by the likes of Madonna, Daft Punk, Cyndi Lauper, M.I.A., and Britney Spears makes for a setlist that would appeal to most, but it is his extravagantly comical interpretations that make them all so thoroughly entertaining. Scales does falter a little in confidence when performing his solo number, but it is wonderfully refreshing to see a highly animated and energetic piano man.

Jinkx Monsoon is a comic cabaret artist of the highest calibre. Clearly, The Vaudevillians is a work tailored to her specific talents and abilities, but the 80 minute show impresses and overflows with scintillating wit, belly laughs and stunning singing. Monsoon’s vocals are powerful, and she seems to have an infinite well of techniques for turning every line in every song into something that earns the audience’s laughter. A segment referencing Henrik Ibsen, “A Doll’s House 2: Electric Boogaloo” sees the leading lady attack Gloria Gaynor’s “I Will Survive” with the greatest amount of flamboyant drama one could ever wish to see. She is like a young Gloria Swanson, only louder and a whole lot sillier.

Combining disciplined training (you can hear it in her singing, and see it with her splits and headstands) and a sense of looseness that is unafraid of heckles and other chanced occurrences, Monsoon’s style is deceptively casual, and incredibly brave. It is live performance at its most thrilling, where the audience feels that anything could happen because the performers and the show’s structure allow, or even ask for it. There is danger in the air, the kind that is completely delicious and irresistible. The Vaudevillians is fun, entertaining theatre. Monsoon and Scales are silly as they come, but without a hint of stupidity, and their show is filled with genuine talent and quite genius creativity.

THE VAUDEVILLIANS is playing The Vanguard, Newtown until Sunday 2nd March.

Suzy’s review was originally published in her blog- wwww.suzygoessee.com