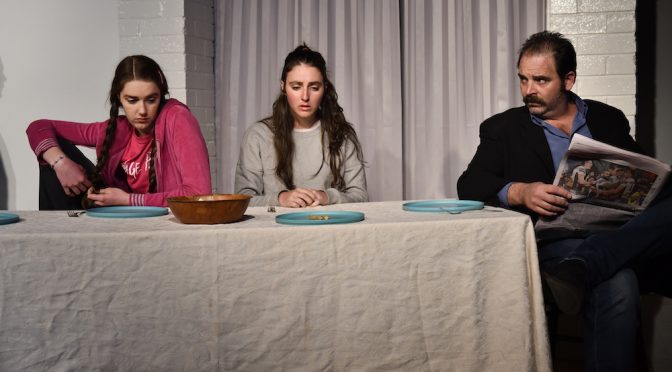 Sydney playwright Amber Spooner has chosen a tricky subject for her first play. The play tells the story of Grace, a woman who was kidnapped as a young girl, spent years in captivity, and then escapes, returning to her family.

The play starts with her having recently returned to her family home, unsurprisingly, a complete, quivering headcase.

She no longer knows how to behave. The family can’t talk to her without her getting agitated. She can’t focus on anything. What’s worse, is she  keeps on seeing her former captor Gregory in the room with her.

As the play unfolds we see what the playwright is trying to do. She is trying to get inside the heads of her characters, most of all, Grace’s.

What a minefield! I spoke to Spooner briefly after the play and she said she did a lot of research for the play, and  in particular drew from the case of Austrian Natasha Kampusch.

What this case demonstrated was that boundaries between the captor and the captive blurred, and that they developed strong feelings for each. Furthermore in the Kampusch case, Kampusch found it difficult to return to family life. She went on later in life to purchase the house in which she was enslaved as it had become a deceased estate after Pfiklopil committed suicide. What a strange choice!

Director Liviu Monsted’s explores this dark territory well. The play was an intense experience, made even more so by the intimacy of the Actor’s Pulse Theatre venue.  Perhaps the actors could pull back a little on the intensity considering the audience is almost ‘on top of them’.

Lucy Hadfield gives a great performance in the role of Grace.She is believable as the tormented soul, trying to find herself again. The playwright wrote in her program note, ‘Grace wants to be in control of her own narrative after it had been taken away from her for a long time. Grace has moments of rare clarity which Hadfield conveys well.

Rosie Meader plays Grace’s younger sister, Hope and gave a good performance, We could tell where Hope’s head was at. She wanted life to return to some sort of normality after so many nightmare years. She was a good natured young woman who didn’t like conflict and much of the play sees her attempting to deflect Grace’s barbs.

Meagan Caratti and Chris Miller convincingly play the traumatised parents. Caratti’s role sees her trying to pacify Grace and her outbursts, as well as her husband’s still high anxiety.

Chris Miller has the more impactful role. There is a lot going on inside him. he still feel guilty that he wasn’t attentive enough the day in the shopping centre when Grace was kidnapped. He has kept all the newspaper articles, as if stuck a bit in the past. He keeps pushing Grace that she has to give her testimony in the upcoming court case. He is frustrated by Grace’s ambivalence.

Christopher Strickland had the difficult role of the sinister Gregory. Sometimes he was playing the role with Grace in captivity in real time. At other times he was the ghost in the room talking to Grace, telling Grace to come back to him, not to reaccept her family. Strickland’s performance was good. I just had the reservation that sometimes on stage he might not have been needed as he was outside the action and the actor seemed self conscious. Perhaps this is something the playwright can look at.

Summing up. Mons Sans Productions, in association with Actor’s Anonymous, have given Amber Spooner’s first play a good production. The play reveals a playwright, and dramatist, of promise.