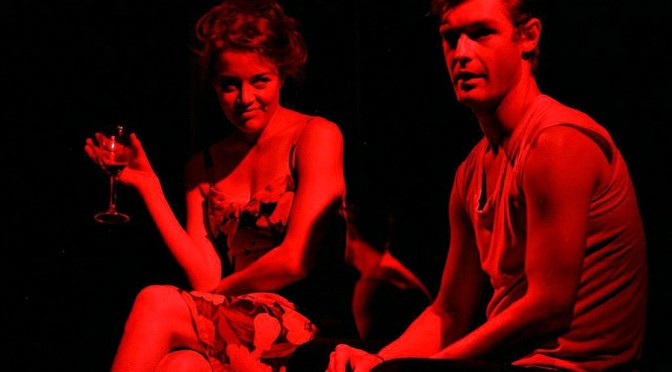 If you like your theatre  extreme, raw, confronting, explosive, and, even at times gross, then the current show at the Stables Theatre, Zoey Dawson’s  THE UNSPOKEN WORD IS ‘JOE’, is your ticket.

Nikki Shiels plays the Zoey character and charts her very intense journey in her struggles to find love in her life and to achieve her dream of being a great writer/playwright.  The play constantly shifts focus between these two struggles- working within a play within a play structure. As she performs and interacts with her actors, reality and illusion becomes increasingly confused and murky.

I  found the show hard going. I didn’t find the main character very sympathetic- quite the opposite,  I was quite repelled by her. I felt little empathy for the terrible state that she finds herself in at the end, a totally driven woman who can’t  find any balance in her life.

The play is unrelenting in the way it tackles its themes as well as in its anti conventional theatre, even mocking approach.

Summing up, this was a very deliberately uncomfortable, brash, provocative night in the theatre. Not my ‘cup of tea’, but there’s no doubting that Declan Greene’s production has considerable impact.

An MKA: Theatre Of New Writing production, Zoey Dawson’s THE UNSPOKEN WORD IS JOE  is playing the SBW Stables theatre until Saturday February 7.