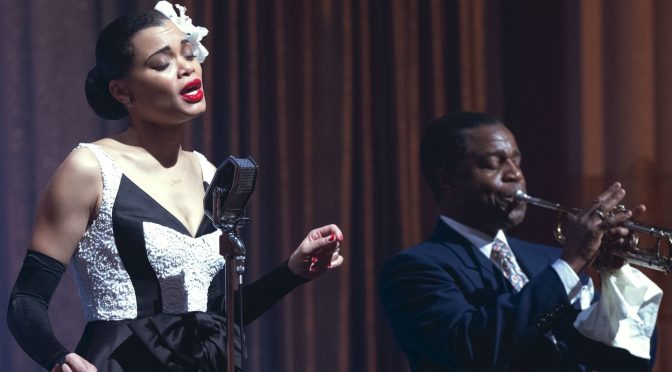 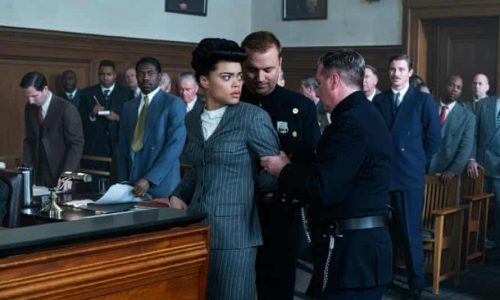 A perfect companion piece to ‘Judas and the Black Messiah’, THE UNITED STATES VS BILLIE HOLIDAY features a knock out performance by Andra Day as the powerhouse singer and warrior against White Supremacy.

The banning of Billie Holiday singing ‘Strange Fruit’ in her cabaret set because it was perceived as an anthem for Black activism may seem totally Draconian now, but one wonders whether Billie Holiday would have been pilloried by contemporary Woke Warriors if she was around today and refused to delete what may have been her personal anthem, ‘Ain’t Nobody’s Business’.

“There ain’t nothin’ I can do nor nothin’ I can say, that folks don’t criticise me
But I’m gonna do just as I want to anyway, I don’t care if they all despise me
I’d rather my man would hit me, than to jump right up and quit me…
I swear I won’t call no copper, if I’m beat up by my papa
Tain’t nobody’s business if I do.”

Back in the day, mid 20th Century, America was facing a perceived Red Menace and Black Uprising, one seen as fuelling the other. Highly prejudicial protege of J. Edgar Hoover, feral Prohibitionist and federal agent Harry J. Anslinger was leading a war on drugs and determined that Black culture, particularly Black musicians, were the major users of narcotics.

A man clearly in need of a vacation, this irksome White Supremacist went hunting a Holiday, sanctioned by a government that had difficulty passing an anti lynching law.

This vile servant of the state slams a prohibition order on the singer not to sing the song ‘Strange Fruit’ because it is seen, or heard, as an incitement of race riot. She defies the order at her peril. In New York City, a cabaret card was required to perform in nightclubs and Anslinger made sure Holiday, due to her disobedience, didn’t have one.

Anslinger stopped at nothing, stooping to everything, to bring her down, including hiring the Black agent Jimmy Fletcher, to infiltrate Billie’s inner circle, prep the conditions to further her narcotics addiction, and have her arrested very publicly and put in jail. He did not foresee his Judas falling in love with the person he was sent to crucify.

Inspired by, and based upon the chapter, “Black Hand,” from British writer Johann Hari’s revelatory 2015 New York Times bestseller, ‘Chasing the Scream: The First and Last Days of the War on Drugs’, THE UNITED STATES VS BILLIE HOLIDAY is penned by Suzan-Lori Parks and directed by Lee Daniels.