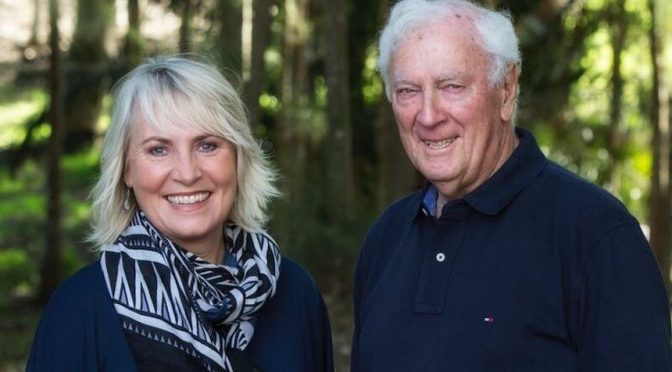 Some things, just maybe, one is meant to see…

My friend Suzi and I were having a quiet morning coffee at one of our favourite places, Dunbar House at Watsons Bay. Many will know it as one of Sydney’s most popular wedding reception venues.

The cafe was quiet with not many people around.

We noticed this couple sitting at a table near us. There was this warmth between them. They were celebrating a birthday.

We started up a conversation. Introduced each other. His name was Tony Doherty, one of Sydney’s leading catholic priests. She was Ailsa Piper, a prominent, now Sydney based, writer. I mentioned that I was an arts reviewer, and that Suzi and I were close friends.

As, indeed, Ailsa and were. They had published a book together with their friendship maintained by correspondence. Appropriately the book was called, ‘The Attachment : Letters From A Most Unlikely Friendship’.

They talked a bit about it. How did they become friends? Ailsa said that Tony sent her an email saying how much she loved the book, ‘Sinning Across Spain : Walking The Camino’.

Her book was about the 1,300 kilometre pilgrimage she took during Easter across Spain from the southern city of Granada to Galicia, the ‘bathtub’ of Spain in the far northwest carrying an unusual cargo. She  said she walked an average of 30 kilometres a day over 6 weeks, One day she walked over 50 kilometres.

Aside from 10 kilograms of her own possessions she also lugged a load of sins in her swag.  She was carrying them to a holy place where these sins would be forgiven. Ailsa said this pilgrimage followed a medieval tradition.

The sins were gathered from replies to the following newspaper advertisement:

“I will walk off your sins.

Ailsa sent a delighted response to Tony, and this started a rapid exchange of letters between them. Occasionally they would meet up when Ailsa came to Sydney on a flying visit. Their friendship has only grown since then.

Suzi and I were getting ready to go when Tony  said that he would just duck home and pick up a copy of the book that I could have a look at.

Whilst Tony was away Ailsa, sadly, mentioned that Tony was battling cancer and undergoing debilitating radiation treatment.

Tony came back and together they added their signatures to the book. We said our goodbyes and I said how much I was looking forward to reading their work.

It made for compelling reading; how two people with very different stories – Tony from the city, Ailsa from the bush, Tony a priest, Ailsa an agnostic, more than twenty years difference in age – went on to form a close friendship.

They both have a love, and a way, with words. Whilst Ailsa was the obvious wordsmith, Tony also had to make his words count when comforting parishioners and delivering his weekly sermon.

‘The Attachment’ pivots around this elucidation by Ailsa, “Letters are a kind of loving..What we have been doing is opening up our hearts and minds”.

They do this in such an incisive way, at the same time revealing their distinctive personalities.

They tell many stories which resonate. At times they are so intimate that they are hard to bear.

Ailsa writes about a much loved theatre director who died of AIDS. He became so ill that his bodily functions just fell apart. To make him feel less alone Ailsa and his other visitors at the time just stripped off to be as naked and powerless as he was.

Tony writes eloquently of the time that he had to bury a fellow Minister who he had worked closely with. There was a time during the proceedings where he just started sobbing uncontrollably. He tried to find somewhere to hide. What was a Minister who dealt with death amongst his community on such a regular basis, doing sobbing uncontrollably? Ministers just don’t do that!

Tony goes on to quote an old jewish proverb, “Tears are for the soul, as soap is for the body”.

At another time in the book, Tony quotes the brilliant Canadian writer, Margaret Atwood describing the power of touch:

“Touch comes before sight, before speech. It is the first language.It is the last language. And it always tells the truth”.

In a lighter frame of mind, Tony writes of burying an elderly parishioner who told him one of his secrets. He spent a lot of time travelling the world and he made sure that he had one phrase down pat in every language. The phrase : ‘My friend will pay’!

On another note, how is this for a compliment? Tony writes to Ailsa, “You’re a firecracker of a woman…Should put you on the Sydney Harbour Bridge on New Year’s Eve’!

Ailsa writes about her definition of love. ‘Love is wanting the best for someone’.

She goes on to write, “I fall frequently for people..I’ve always  said that I can fall in love with anyone- male or female, young or old, straight or gay.

At another time she writes, “I will go where my heart leads, and it rarely takes me down a blind alley”.

Sadly, near the end of the book Aisla tells of how her husband of twenty five years died suddenly of a stroke. She was in Sydney when it happened, devastated that she wasn’t there to help him ‘make the leap’.

Ailsa’s sister had to leave not long after the funeral. Tony was still in Melbourne and was asked if he would come over and lend support. He did. They went through each room in the house with Tony helping her as Ailsa’s memories were triggered.

Back to the present. It is now four years since ‘The Attachment’ was published. After learning their story, it is great to see that their attachment, their friendship, remains intact and as true as ever.

Who knows how long their friendship will have to go?

This post aims to honour, and bring to a wider public, their unlikely and beautiful friendship.

Title : The Attachment : Letters From A Most Unlikely Friendship

Title : Sinning Across Spain : Walking The Camino : Now With A French Trail

One thought on “THE TWO OF US : AILSA PIPER AND TONY DOHERTY”