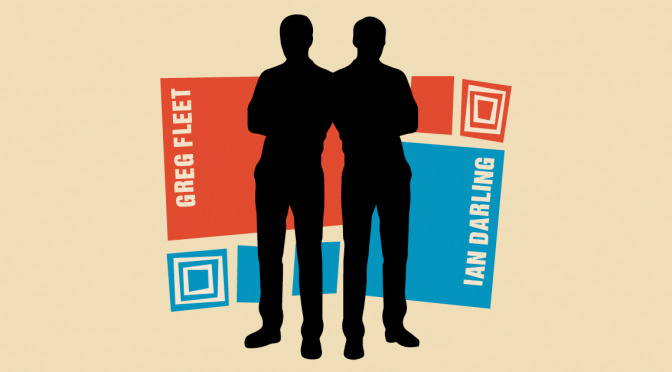 Two men appear on stage. Both are 60. Both are famous in Australian cultural circles. Both are very brave to reveal themselves so publicly. They are not actors. They play themselves developing a play about themselves. This isn’t verbatim theatre or theatre verite. It’s a recital of their forty year friendship from their days in high school to 2019 when they developed this performance piece about themselves. It’s an odd concept and it mostly engages the audience. It’s a concept that is worth other creative groups and theatre companies to explore further.

Ian Darling plays himself opposite Greg Fleet, playing himself, as they workshop the piece at the Shark Island Institute’s ARTSLab in the Kangaroo Valley.

It’s a brave man who so publicly reveals himself. Ian seems to be apologising to the audience for talking about himself. ‘Australians don’t do that’, his body language says. His Order of Australia, his considerable philanthropy projects, and his impressive films are referred to many times. And, indeed,  they are impressive and important films, the latest being The Final Quarter.

Greg Fleet talks about his fight with addiction, the heroin death of lovers, and his father’s abandonment. For Greg, some of his speeches come across as the need to de-brief to the audience.  For both men, it’s all out in the open for all to see.

Much of the dialogue is humorous, nuanced and interesting. We don’t engage emotionally with the men and we don’t really need to. It’s pleasant enough as it is. We don’t see an epiphany from either.

Ian became a businessman and eventually switches to film making.  Greg’s stellar comedy career stalled because he was an addict. He later switched to writing, (Thai Die, These Things Happen and The Good Son).They don’t show us these drastic and apparently angst-ridden changes. They tell us in snippets then move on to other topics. Consequently, the performance drags somewhat after we realise it’s going to be the same level of intensity through to the end of the 85 minutes.

There are many good moments in the performance. The only thing that annoyed this reviewer was the ‘Do you smell smoke?’ theme that came up, I think, three times. The setting is the Kangaroo Valley just before the horrific fires. Yet, they don’t seem concerned about the fires. They don’t ask if they should be doing something to prepare themselves. They don’t ask if they could be helping others.

Nonetheless, there are many good moments in the brologue. THE TWINS is a unique performance piece worth seeing. Best wishes to Ian and Greg for revealing themselves to us in this engaging piece.

THE TWINS is playing at the Reginald Theatre at the Seymour Centre until April 17, Kangaroo Valley April 30 to May 1, Canberra, May 3 to 6 and Melbourne May 10 to 16.