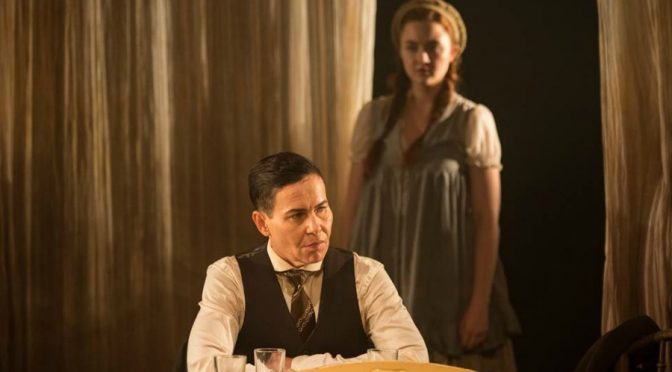 Nothing is as it seems in THE TROUBLE WITH HARRY. From the obscuring haze of thick smoke as we enter the theatre to the delicately constructed dance of death that concludes the work, people and events are viewed through a glass darkly. A mirror, a lens, a dirty window pane perhaps. There is an obstinate obfuscation in Lachlan Philpott’s text and Director Kate Gaul has successfully pulled the story from the page without exposing it to the full light. Like the magnesium flashpowder of the antique photographer’s T which will give light to a sepia photograph, there are puffs of understanding dispersed in a stillness of wondering.

THE TROUBLE WITH HARRY is a highly theatrical interpretation of a true story. Harry Crawford was arrested in July 1920 for the October 1917 murder of his wife, Annie. Her charred remains had been found near the Lane Cove River at Chatswood where she and Harry had been picnicking. When taken to the police station, Harry asked to be taken to the female cells and it was revealed that he was in fact Eugenia Falleni, assigned female at birth. Harry had been living as cisgender man since he had run away to sea as a very young person.

The image on Siren CT’s poster is from the Historic Houses Trust held mugshot and there have been exhibitions and articles, books and podcasts about the case in our own time. But it is the morbid curiosity, malice and prurient interest of the public at the time of Harry’s trial that allows us so many records about the case.

Harry (Jodie Le Vesconte) is unknowable. At times loving to Annie, other times harsh and unrelenting to Annie’s son or his own daughter, he is inescapably tough. Le Vesconte captures his severity in stance and voice. No credit in the program for the makeup artist who created the facial bedrock on which Le Visconte uncannily manages to draw the sad eyed, hard faced masculine looking person who stares from the poster. When Harry is caught in a vulnerability late at night in the privy, Le Visconte captures his anger with an emotional rending of the air by some perfectly placed swearing followed by some equally well positioned softening of affect, making for the empathy that the audience craves.

Neighbours are suspicious of the husband who whispers secrets to his tomatoes and the wife who draws her curtains to block out the street and Jane Phegan’s Annie is as tightly wound as her practical, pulled-up hair. On the surface, Annie is maternal, domestic and affectionate. But as her world changes and the weight of their secrets press, Phegan takes her into darker territory. Much about Annie is learned from the other characters, her fear of going out with Harry for example, but Phegan gives her the insular, outgoing, cold, warm complexity that makes sense of the received knowledge.

In effect, most of the ancillary information in the text is provided by two everypersons. (Niki Owen and Thomas Campbell). The trouble around Harry and Annie is elucidated by this small Greek Chorus who use bite size poetic staccato to impel the plot, set the scene and lighten the inescapable bleakness of inevitability.

Owen and Campbell have such a lovely rapport and they handle the much needed comic moments with charm and a sense of fun without taking the audience too far from the sadness we feel for the circumstances we see. They also take on a range of characters undeniably required yet strangely superfluous to the plot. The pair are modern but not anachronistic as they skirt close to the early 20th century characters and in the beauty of their lyrical expression they provide the music to gently guide emotions. “Blood floods faces” gave me goosebumps.

The other two characters are Harry, Annie’s son (Jonas Thomson) and Josephine, Harry’s daughter (Bobbie-Jean Henning) . Thomson does not quite convince us of Harry’s youthfulness but does provide an important emotional foil to the older Harry’s little cruelties. Henning brings a manipulative knowingness on with her to successfully intimate the embittered and hostile young woman who has been so badly treated. Nothing overt though, Gaul’s vision is a purity concealed.

When the men stand at the bar for the 6 o’clock swill, there are no glasses, no mimed drinking just Owen and Campbell’s words to presage the ritual of the male working class coming home to a dinner on the table. There is clever and constant movement countered with stillness and silences. Some of the silences were finding their length on opening night but still impressively conveying the conflicted nature of historical events imagined for the stage.

Superb lighting by Matt Cox washes the participants and the places in light amber. In so doing it allies itself with the over washed poverty of the sepia and browns of the costuming by designer Alice Morgan. The long shadows as Annie leaves the stage for the last time … just so powerful. As Owen and Campbell describe what happens at night, there are no glaring blues in the state and the lightning is not white but a stutter of yellow kitchen light in the incandescent above the table.

The set is equally stark. Audience sit on each side on risers in mismatched wooden chairs echoing jurors observing a trial. A raised wooden stage in which are traps secreting the very spare props. Curtains which hide or reveal and which can be draped around a person like the neoclassic folds of sandstone carvings on a colonial Sydney public building. And Nate Edmonson’s  subtle original music  is equally hard to grasp hold of. The tinny echoes of a fairground organ or the reverberations of Harry’s tuneless whistle with instruments which escape easy classification. The low and lingering topped by crystal lightness for a tightrope walk which leads into a cello/ string/ electric under-wail for the ensuing monologue. It is a marvellously cohesive production.

The ‘seeing through a glass darkly quote’ is also about ‘knowing as I am known’ at the end of days. THE TROUBLE WITH HARRY brilliantly allows the shade and shadow of one transgender person’s tragedy to enrich a modern conversation . Harry Crawford reaches out through wisps of time to imprint an audience with respect and intelligent regard for the man he knew himself to be.

Lachlan Philpott’s  THE TROUBLE WITH HARRY is playing at the Reginald Theatre as part of the Mardi Gras Festival until March 3.