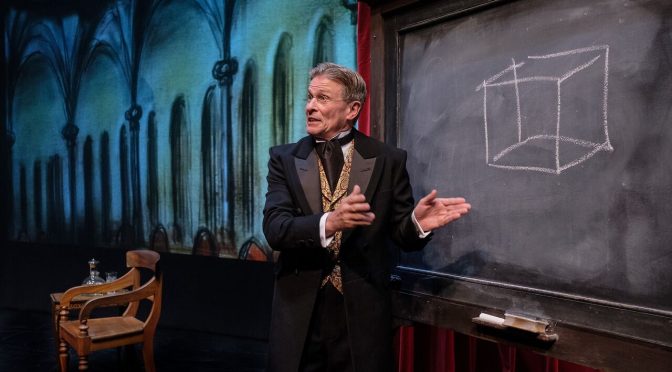 THE TIME MACHINE is a boys’ own adventure.  Now at the Playhouse, NIDA theatres,  it is written as a one-man play by Frank Gauntlett and based on the novella by HG Wells (1895).  It is of its time and acceptance rather than critique, and a bravura performance, will keep you in your seat.  Growing up, the topic of H Rider Haggard often came up at the dinner table once my father had pushed me to read his favourite writer.  Immersion in the Victorian adventure genre helps, as does an understanding of the roots of science fiction and of speculative writing and it doesn’t hurt to have a vague knowledge of the Utopian ideas that Wells attacks in the novella.

Classic works teach us about the time in which they were written and this production places itself squarely in period without bends and tunnels that might nod to the present.  End of the 19th century ideas… elitist, class ridden, paternally misogynist… are left as they are so we can ride the adventure to enjoy the engrossing performance of Mark Lee as The Time Traveller.

He greets us as if in a lecture theatre.  ‘Gentlemen’ he says, I have invented a machine that will take me into the future before bringing me back to you.  He exits and after a long, long silence, re-enters a changed man.  He has been 800,000 years into the future where humankind has evolved into just 2 classes.  The beautiful, vacant, idle Eloi and the fearsome, twisted Morlocks.  His machine being stolen, he will necessarily explore these dual societies, falling in love with clingy, useless, pet-like Weena along the way.

Lee is simply commanding in this role.  His vocal work is just sublime as he drops into a lower register for profundity and pronouncement and rises for the fear and terror that he describes.   I closed my eyes several times to enjoy the cadences and variety of such a boisterous narrative.  As directed by Gareth Boylan, he also has flowing and expressive body language.  Drawn by present and consistent character, his physicality keeps pace with the external forces, the “limp of footsore tramps” skilfully created.  One minute he is looking out at us for acceptance, the next curled on the floor with the horror of relating his discoveries.

The setting is wide, period and with discrete elements to extend the Victoriana.  A blackboard enhances the lecture feel and a miniature of the machine is shrouded on a plinth. (Designer: Derrick Cox) The work is further enhanced by several broad brush, colour muted illustrations projected onto the upstage wall (Illustrator: John Kratovil).  These are not too many and syncopate with the story rather than reflect the action.  The lighting makes clever use of shaping to trap the character in light but there were a few too many cues, the changes not always in concert with the events and occasionally quite distracting. (Lighting: Martin Kinnane)

Adding a final element to the choice to let a classic work lie is the costuming.  (Costumer: Christine Mutton) A stunning frockcoat, gold waistcoat with delicious buttons and winged collar to begin.  But really very clever design is on display after The Time Traveller re-enters.  There has been an uncomfortably long break which unsettles and foreshadows.  Then he staggers in, reeling and silent, searching for equilibrium and words.  His shirt is slightly burned, one arm has a simple swathe of blood, with other subtly detailed impacts about his person .  There is enough in that visual to suspend an audience and generate curiousity.  I loved that aspect.

Actually, I enjoyed the whole show.  It bolts away for 70 minutes and it is a tale well told.  There might be discussions to be had around the dinner table about some of the content but I was content to sit back and enjoy a wonderful performance, a classic work and a time thankfully passed.

THE TIME MACHINE, Strange Duck Productions [Facebook] , continues at The Playhouse, NIDA Theatres until May 2nd.