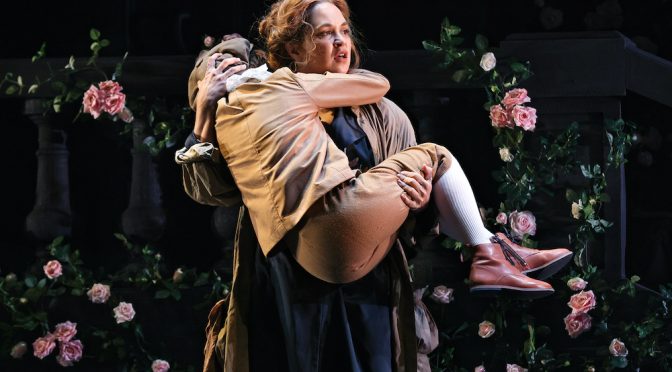 The mid to late 19th Century was a tumultuous time in male/female relations. The literature of the time reflected this. It is said that bedroom doors around Europe shook when  Nora left her husband Torvald in Henrik Ibsen’s ‘A Doll’s House’ which was first performed in 1879. Equally, a bit earlier in time, in 1848, Anne Bronte’s (published under the pseudonym Acton Bell) novel THE TENANT OF WILDFELL HALL, the heroine Helen’s decision to slam the door on her marriage to her husband Arthur reverberated throughout Victorian England.

THE TENANT OF WILDFELL HALL is considered by many academics as one of the first great feminist novels. And now Bronte’s work has made it to one of  our main stages with Australian playwright Emme Hoy’s whip smart stage adaptation.

Hoy’s adaptation has been well directed by Jessica Arthur who has worked with an excellent creative team to bring their vision to the stage. The main creatives are Elizabeth Gadsby’s multi layered revolve set design,  Renee Mulder’s superb period costumes, Trent Suidgeest’s lighting design with many great touches, John Gardiner- Garden’s choreography and Clemence Williams edgy soundscape. Arthur has the lead give many direct addresses to the audience which gives the audience a nice warmth and intimacy.

Arthur wins good performances from her cast starting with Tuuli Narkle who is just wonderful as the heroine Helen Graham. She is a compelling presence as we watch her through the performance as she struggles to break free from the marriage.

Remy Hll  impresses  as the ‘good’ guy, the erstwhile Gilbert Markham who is in love with Helen but has so many obstacles in his path.

Something  didn’t feel right about Danielle Catanzariti’s performance as Helen’s son, also named Arthur. Why was a young woman playing a boy? I guess I just didn’t like the choice.

Steve Rodgers impressed in two roles as the obnoxious, awkward Reverend and in the more substantial role as  the vapid Walter Hargrave, a friend of Arthur Huttingdon’s.

Nikita Waldron shone in two roles as Arthur’s mistress Annabella whilst being married to Lord Lowborough, and Eliza Millward, the daughter of the Vicar and a town gossip.

The always wonderful Tara Morice played three roles that of the scandalmonger Rachel, Mrs Markham-Gilbert’s mother who is a great admirer of the Reverend and his ideas, and Helen’s Aunt who tries to warn her against marrying Huntingdon.

Eliza Scott is great in multiple roles- as Mary Millward, Eliza’s elder sister, a plain, quiet, sensible girl, housekeeper and family drudge, Millicent Hattersley, a meek woman married to Ralph Hattersley against her will who is also Walter’s sister and Helen’s close friend. She also added to the production by playing piano and singing with an exquisite voice.

A feature of the play was that it had some very powerful scenes.

There was the scene when Arthur Huntingdon was drinking with his friends with his young son present. He makes his son skull alcoholic drinks to the point that he is going to be sick. Even his friends tell him to stop but he just won’t listen and carries on regardless.

Helen of-course isn’t impressed. At one point later in the play when he needs her help, he tells his wife that he is going to change. She doesn’t believe him. Nor did the guy sitting in the row behind me who said to his wife, ‘sure he will’.

Another powerful scene which reveals Arthur’s poor character is when he realises that Helen is trying to leave him. He grabs paintings by her and throws them into the fire. It was like he was throwing her heart into the fire.

One of the saddest scenes in the play involves Walter Hargrave. Walter has always been in love with Helen. He senses that Helen is going to leave Arthur. He finds a time where they are alone together. He professes his love for her. She refuses him. In through the door walks Arthur.

For all the plays’ considerable complexity, the production has an ending  of the utmost and blissful simplicity.

Featured image : Danielle Catanzariti and Tuuli Narkle in The Tenant Of Wildfell Hall