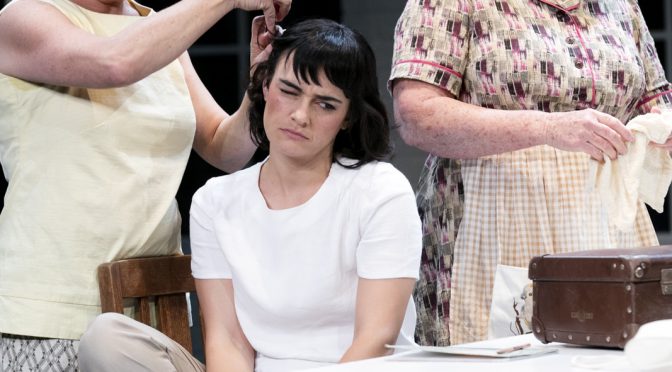 Even at this advanced age and after a lifetime immersed in performing arts, it never ceases to amaze what live theatre can do.  Brilliant productions soothe that intellectual itch for stories, fetching complex characters to populate a richly defined place such that you lean forward in your seat and crane your head across the wide stage to make sure you don’t miss anything.  And then a detail hits you square on to draw the breath.  For me, last night at THE SUGAR HOUSE playing at Belvoir, it was Nana’s brooch.  Unbidden tears of recognition foregrounding the  recognition of investment, only the live can do that!

We meet Narelle Macreadie.  Flinty, hid and restless.  It’s 2007 and she is ostensibly viewing a large apartment in Jackson’s Landing, warehouse living in a development built on the old Pyrmont Sugarworks.  The play will travel back and through the eight-year-old Narelle we will come to understand the family that made her.  In Act 2, through the 20 something Narelle, we are lead to an understanding of how she made herself.

It is a wonderful ensemble who bring this story to life.  Sheridan Harbridge’s Narelle is introduced to us as a guarded, unreliable figure and her breakout to become the younger character is a heart-warming, warming change.   The eight-year-old is perfectly age placed, the creation without the recalcitrance of the slightly older nor the silliness of a girly younger. There is one special moment just before interval where older speaks through younger to Nana.  Just a sentence to break a female watcher’s heart.  Harbridge also implodes as the rebel of the 2nd Act.  University Narelle is discreetly a reflection of her progenitors with a individual lostness that is not hidden from our view.  The memories weigh on her to take us carefully to the climax of the piece.

The characters of her grandparents also lovely creations.  Sidney is played by Lex Marinos with a soft touch as a soft touch.  He explains things, he is honest with his granddaughter and you know he is secretly giving her a dodecagonal fifty cent piece to buy lollies at the local shop.  His relationships are gentle and supportive and loving, particularly with his hard-shell wife.

Played upright and outright by Kris McQuade, June is matriarchal strength and power held up by bad blood.  Sheer force of will propels her and her intent for her son and granddaughter but, in the pinch, it deserts her in a moving scene where the carapace crack is violent and wrenching.

The Macreadies are prone to violence on June’s side.  Blood will out and it asserts nowhere more than in her son, Ollie.  Josh McConville initially exhibits the bravado of the favoured child but McConville endows Ollie with real fear as consequences loom large. Especially well expressed is his little speech about love which rings clear and true.  This speech is to new squeeze, Jenny (Nikki Sheils).

In Jenny we see the freedom of the mid 60s new gen.  Mini skirt and minted courage to make choices and asks for what she wants.  Sheils travels quite an arc as Jenny grows into maturity.  (A mention, too, of Sheils’ other role as Prin, a recognizable classic brought back from the brink of caricature by delicious comic skill.)  Jenny is outside the family and not prone to the excesses of tough love, unsaid affection and outburst.  The brunt of which is felt by Narelle’s mother, Margot played with wry dysfunction by Sacha Horler.

In 1960s working class Australia, boys were overvalued and girls were noticing.  Margot is always less than but with a sharp tongue and her mother’s emotional reserve she expresses the inner drive and steel to fight for her place in this little family.  With strong distrust and an assertive despairing, Horler brings real heart to Margot in Act 1.  Without which, the emotional content of Act 2 of THE SUGAR HOUSE would struggle to succeed.

Written by Alana Valentine this play is emotionally satisfying and story rich.  The names, Lennie MacPherson, the places, the refinery boss’ place up John St, the characters seen, corrupt cops, and unseen, SP Bookies all contribute build the recognizable and rememberable world in which the Macreadies live.  Even if Act 2, for me, was a little long on homily and emotional climaxes I still left permeated with the depth of the narrative and niggled by sleep-disrupting consideration of mother-daughter relationships.

Directed by Sarah Goodes, the production has a held in quality which balances so nicely with the lovely comic moments.  The appeal not just in some very enjoyable nostalgia… “you drongo”, but in the situational ridiculousness, like fighting over what kind of Christmas tree. The set (Designer: Michael Hankin) is wide and spare allowing a ranging as befits a story across forty years.  The white modernity of brick and warehouse beams that have obviously had a pre-paint life is coloured by people around the table.  The scene changes are done with style and character which mitigates their frequency and the somewhat annoying anachronistic click of wheel locks.

The light through the huge windows is well chosen for ambience and the use of floor floods gives the largeness of the space an extra fillip. Designer Damien Cooper limits the state changes within the narrative, giving a consistency of place and his design sets time with ambient wash through the windows rather than annoying shadow bars on the floor.  The audio (Composer: Steve Francis, Sound Designer: Michael Toisuta) is well curated within the emotional topography.  In the song choices with vocals yes, but particularly when the music sneaks in like organ music under a melodrama to enhance the mood.  Dense, quiet, distant machinery drone also impacts seamlessly in concert with the on-stage temperament.

And costuming that completes the impel of audience engagement.  (Designer: Emma Vine).  Stubbies shorts, a man’s dress ring, pillow hair.  Without any showiness, there is detail everywhere, replete with character and class and period. And there’s Nana’s brooch!

THE SUGAR HOUSE brings home to us Sydneysiders the urban geography through which we move and the travelling flicks a grit of nostalgia into our eye.  The Macreadie’s lives are lived at Belvoir until June 3rd and it is a must experience production.