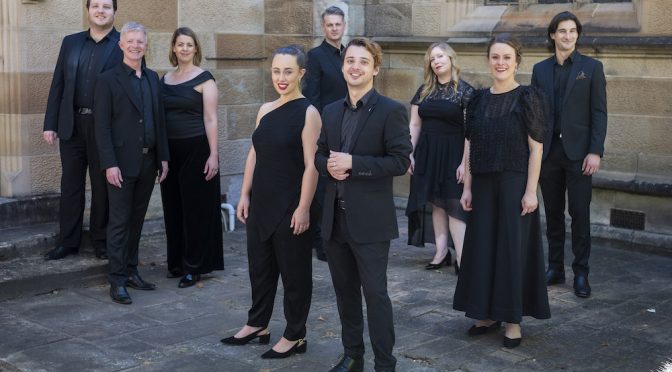 Sydney’s entertainment scene is slowly lighting up again with audiences coming out to get a taste of what they’ve missed so much over the past two years. They are yearning for that personal touch and the cherished experience of once again being in the presence of talented performers. There are large and small acts on offer around town though the smaller ones happen less frequently now with the little venues struggling to survive.

Having the Song Company as part of our offering in Sydney has always been a great privilege. Their standards have always been exceptionally high, showcasing a collaboration of top artists mixed with young up-and-coming artists being mentored up the ladder into the Arts industry. The current Artistic Director Antony Pitts keeps those high standards maintained and draws in new ideas fluently and consistently. This makes for a fascinating series of programs each year with a mix of old and new composition using big and small ensembles. You can always depend on The Song Company to bring you a quality performance.

ENTANGLED last Friday and Saturday night this week was no exception. The Song Company have been running their “Close Up” series for several years now. It’s an opportunity to showcase some of their established artists so the audience can get to know them better. In this format, the artist can spread their wings, tell their story and share their musical journey winding through the various genres. Jessica O’Donoghue’s journey surely winds through many hills and dales. The show title perfectly encapsulates that journey.

Passing through a formal education at Sydney University and Victoria College of the Arts, O’Donoghue refined her classical training at the Royal Opera House Covent Garden and “on the job” in all manner of places. She arrived on stage for this performance in a long casual dress and sneakers announcing this would be an informal setup. It gave her permission to chat with the audience in a light hearted banter which immediately put everyone at ease.

Her performance began with some laid back Jazz, beautifully executed, then jumped to an early 11th Century a cappella song, then over to 19th Century opera aria. It was an astounding start making the audience sit up in their seats. This is no ordinary performer. Not an opera singer who says “Yeah, of course I can do jazz” and then can’t. She really can.

Her stories set up vivid images for the audience throughout the performance, relaying opportunities that popped up which would change her pathway, challenging jobs and vivacious personalities she’d worked with. Her perspective on the aging world of Opera got people talking afterwards. She spoke of the Romantic Era operas that are much loved and contain fabulous music but, alas, the stories are incredibly out of date and often hard to relate to. Written from a man’s perspective, most of the female characters were either stupid, sick, meek or lacking in resilience. There are very few really strong female characters that survive to the final curtain – can you think of many?

So although she is completely competent as a professional Opera soloist, her career seems to have favoured festivals and concert performance.

The other marvellous surprise of the evening was her talent as a composer. With 6 albums already under her belt (recording with The Renaissance Players, CODA and Kinderjazz and one of her own) she is very well familiar with what is required. This time she is recording a second album of her own compositions.

Highlighting a few of her works, she began with the single “Rise Up”. It tells the grizzly tale of the women and children in Souli, Greece. When the Ottoman Empire invaded Souli, they planned to take all as prisoners. The women decided they would all suicide throwing themselves and the children off a cliff into the ocean rather than lose their freedom. The rhythms are tribal and based on the traditional Greek “Dance of Zalongo” which, in sharing the small performance space with the performers, was completely thrilling.

At the opposite end of the scale was a heart breaking lyrical piece for which O’Donoghue accompanied herself on piano. This was a song which arrived in her head in its entirety, channelled from her father who was lost to suicide after a long period of mental illness. The words were hard to pick up – singing acoustically might need more articulation – but the overall effect was a message of his deep love for the family he left behind.

The other works sometimes seemed extremely simple with very little melody but the structure would grow and change in ways much other contemporary music fails to do. Her works are eclectic, covering many moods, curious chords and great passion.

On stage in support of O’Donoghue was Artistic Director Antony Pitts at the piano. He has some hidden talents up his sleeve as well, moving from simple chords for the a cappella, through to covering the opera, jazz and contemporary music. Her brother Ben O’Donoghue featured on bass creating a strong foundation for the music, often adding percussion. For the latter part of the performance, backing vocals were added by Jayden Selvakumaraswamy, Elizabeth Player and Lucinda Edwards. These young women were superb singers with accurate pitch, styling and empathy to fully support O’Donoghue as she wove her journey for us.

The audience expressed their pleasure at the close with enthusiastic applause and much comment at the impressiveness of the performance. O’Donoghue proved herself to be an incredibly unique, versatile and ambitious artist/composer. We can look forward to much more of her work in the future.

The Song Company on Bandcamp: https://music.song.company/