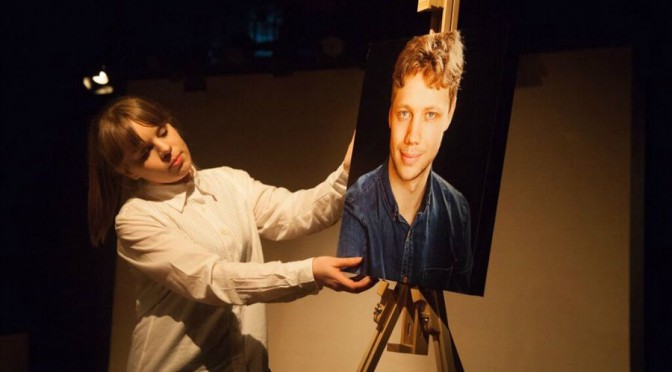 THE SHAPE OF THINGS by Neil LaBute is a modern classic. It is on the HSC syllabus, was made into a successful film in 2003 and was most recently revived in London in 2013. The current JST production, as part of the Sydney Fringe, is not intimated by the play’s pedigree. This is a back to basics production which takes a closer look at the personal dynamics and cruelties at the heart of the piece in an entertaining and engaging way.

Adam and Evelyn meet in tricky circumstances in a small college town museum. She, a visual arts student, objects to the figleaf over the ‘grapes’ of a classic statue. He, a part-time security guard and English major, approaches her with concern about the spray can she has in her hand. She is caustic and opinionated; he is diffident and somewhat blank.

They become involved and her biting and manipulative ways become more overt as he changes for the better. New clothes, new outlook, physical changes around wearing contacts, working out, changing his hair and most contentiously, his nose. His two friends, Jenny and Phillip watch on as these changes re-write their daggy, nerdy friend. Eventually they don’t fit into his new life either.

One of the things that makes this play such a classic is that the shocking ending only serves to make you want to see the play again. Jordan Shea, the show’s director, has successfully given a returning audience the depth of character and theme to enjoy the undercurrents without losing the enjoyment of the surface narrative for a first time viewer.

It’s a small space at the newly emerging venue of the King’s Cross Hotel and this benefits Shea’s take on the play. Because of the narrow stage, characters can sit across from each other just talking for whole scenes. Shea resists any impulse to make them move without motivation. Given the small space, we can see both without any head turning and so we don’t miss any nuance of response or reaction and can be lead to a focus in what lies beneath the text.

The Adam/Eve symbolism is most evident with Luke Holmes who does a great job of representing a young man who will be reborn and he and Tina Jackson as Evelyn really nail the first scene. It is sometimes difficult to see what emotional drivers impel Adam to overcome his shyness to make a move on Evelyn. She is often played as cynical and aloof but in this interpretation Evelyn is funny and just annoying enough to be entertaining. And here, Adam is nerdy and polite but not wussy or passive. We can see what attracts him to her. The comedy of the bed scene is nicely balanced and the couple have great rapport.

The humour is generally well brought out by the cast and Claudia Coy has developed the character of Jenny from the last time I saw her play the role. She is funnier, slightly more ditzy, yet with more complexity in her emotional responses, especially when she has no dialogue. When Evelyn rips her to pieces, we see the interior working as she steels herself to fight back. James Manera was also in the earlier production and his Phillip is still very angry and his performance does lack variety of pace and clear character.  The boys’ scene together, where the real communication is sub-textual rather than what we see or hear, worked well.

In the penultimate scene of the play, Evelyn speaks directly to the audience to introduce and defend her Thesis. While explaining art is a bit like ‘dancing about architecture’ it does encourage the audience to examine the parallel world of the art they are experiencing. This stripped back production successfully creates an environment where the viewer has both an interest in, and enough empathy with the protagonists, to attempt that analysis. If they want. Otherwise it’s just an entertaining 90 minutes and that’s OK too.

You need to be quick to see this show. The show’s final performances at the theatre space within the Kings Cross Hotel are tonight (Saturday) and tomorrow night.