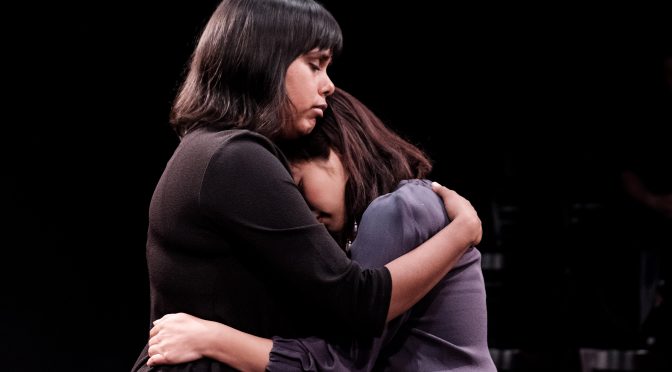 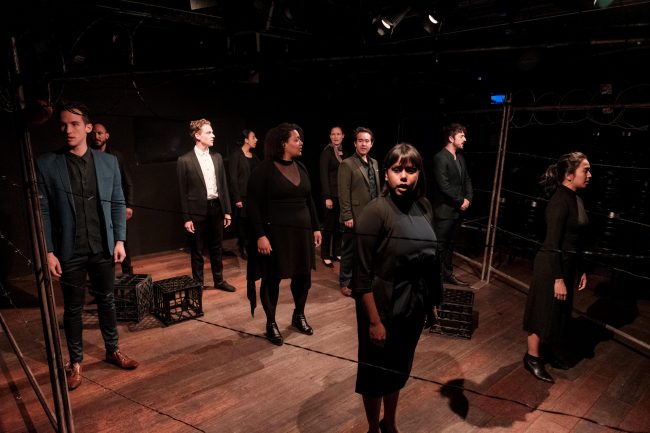 THE SERPENT’S TEETH is currently playing at Kings Cross Theatre.  It’s an exciting production with an extremely diverse cast of 15 actors from across more than 9 cultural backgrounds.  Directed by Kristine Landon-Smith it has been getting great reviews and as the season draws to a close we had the opportunity to speak with two of the cast, Phoebe Grainer and Jillian Nguyen.

SAG:                      Congratulations on the production.  This is an interesting staging concept for the venue with two distinct places evoked for the two short plays. Is the playing of several characters aided by the physical setup or is mainly in the psychology of each?

JILL:                        Both, but more so the psychology. It’s a pretty bare set, dream like in some ways, sprinkled with little moments of humanity. The first set up helps me as the actor but above all, it serves to make the audience feel a certain way. So I think the psychology of me in the characters’ circumstances is absolutely vital to navigate such a non linear play.

“Pleasure to play”, is director, Kristine Landon-Smith’s catchphrase. She encouraged us to not think too much about a made up character, but to simply be ourselves and present with the other person.

SAG:      That opening sequence where people pass each other, occasionally catching each other’s eye is very telling. How was that brought to finality in the rehearsal room, how were those choices developed?

PHOEBE:              We went through a lot of work in early stages of rehearsals with the director on the opening sequence. It was important to get this section right but when we did get it was great.

JILL:                        The people passing through alludes to ghosts of those who have lived behind the walls of separation. Our director Kristine Landon Smith was very precise about the opening. She was very observant of the energy and the pace to ensure that it was seamless. She envisioned it filmically, so she wanted it to be very subtle but purposeful.  Every person brought in choices and Kristine would refine it. I tried a few things and ended up being cut from the opening completely, but it was the right thing for the play!

SAG:                      It’s a slow burn play and a lot of time not on stage for the cast. How do you keep your focus? It’s a tiny dressing room and not much space on stage left but I noticed that you both bring a very noticeable energy on with you, even if imbued with sadness.

PHOEBE:              Kristine Landon-Smith, throughout this time working on The Serpent’s Teeth, and even when she was my lecturer at NIDA she would always say ‘dare to be superb’. It’s about staying in the process and understanding what you need to do.

JILL:                        This is my first play ever and I’ve learnt a lot.  I’ve been comparing going on stage to an athlete going on the field to play a match. Nerves are inevitable but I have to be centered. Some immediate moments before a high intensity scene, I’ve had one earphone on and I’ll play a provocative song that takes me into the world and scent of the play. I can’t be distracted. I have to have the right energy to fuel a scene or it simply won’t work. One of my favourite classical pieces that always grounds me is, “Yumeji’s Theme” by Shigeru Umebayashi.

SAG:                      There are several instances in the play where other languages are spoken and translated, it’s not a new technique, but very emotionally affecting. It can’t just be the English words that impact on the audience, what do you think?

PHOEBE:              It is so important that we have had other languages in this play, this cast is diverse.  Its true to who we are and it brings these stories to wider audience. Even if you don’t speak the language you will understand what the performer is saying, I guess it is your own choice as an audience member to listen and understand.

JILL:                        I think it’s so special and rare for so many different languages to be honoured like this, in a theatre space. Personally for me, it was kind of spiritual, and so powerful. Initially it was a test for me as I’ve never spoken romantically about a lover in Vietnamese before, but thank goodness I got to do it in this play!

I could see the audience being quite baffled in some ways when they heard the French or German or Vietnamese. Kristine’ intracultural work challenges the notion of always having English as the only language in the acting. Why is it always English?

It was the Kristine who encouraged me to bring my Vietnamese into my acting. English is my first language, but Vietnamese is my mother tongue. Using Vietnamese has made me realise that I haven’t really had the chance to let my Vietnamese spirit come alive, artistically. I was born in Malaysia at Sungai Besi refugee camp, but I came here as a baby. I had to learn Vietnamese for 13 years or so on the weekend, so I speak it pretty well.

I’ve had a few audience members approach me after the show and I can tell it’s an experience they haven’t had before. It’s nice. Someone asked me if it was Japanese I was speaking, which made me giggle and it reminded me why it was so important for people to be exposed to so many other cultures and languages. It’s enriching for everyone exposed, including myself!

PHOEBE:              I recently showcased a play at the Festival Fatale at Darlinghurst Theatre Company that I have co written with Wendy Mocke called ‘Jelbu Meri’. I hope to continue working on that and other writing works.

We’ve all been so busy, but there will be spring rolls or rice paper rolls at some stage. I’m already planning a lush potluck. And we had 6 birthdays over the rehearsals and production period, so a lot of birthday cake was eaten too!

THE SERPENT’S TEETH from Hasemann, Ball & Radda is playing at the King’s Cross Theatre 9-24 November. 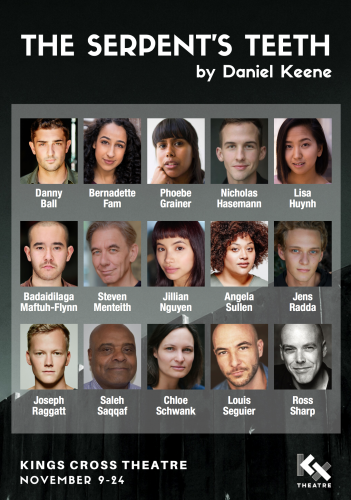