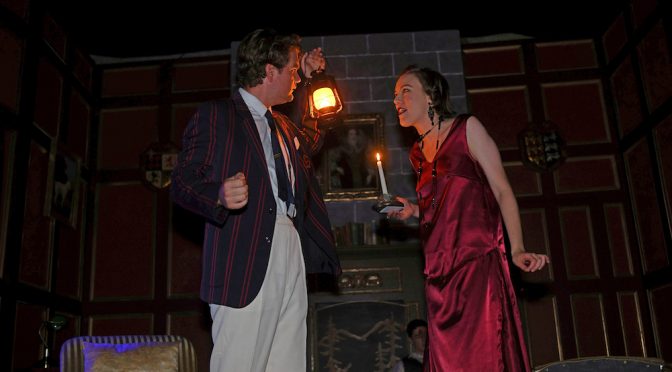 With THE SECRET OF CHIMNEYS the Genesian Theatre Company (GTC) once again welcomes audiences into Agatha Christie’s world. This is one of Christie’s lesser known works. Christie wrote the play in 1931, an adaptation of her novel of the same name, published in 1925. The play didn’t have its world premiere until 2003 with the Canadian theatre company, Vertigo Mystery Theatre.

It’s a regular event that the GTC puts on a Christie murder mystery. The Christie shows bring in good houses for the Company. This again has proven to be the case with the season, already, almost sold out.

In THE SECRET OF CHIMNEYS it is the 1920s in England. Aristocrat Lady Caterham agrees to host a weekend party at her stately home called  Chimneys. A murder occurs in Lady Caterham’s council chamber room. The dark secret of Chimneys is that famous diamonds have been missing for years somewhere within the Chimneys estate. Chaos ensues with, of-course, police officers in tow.

Molly Haddon helms her first production for GTC with a sure touch. A feature of her production was how well it took audiences back to the roaring 1920’s. The set, the costumes, the hair styles and the music well and truly take us back to that period in time.

Haddon receives good support from her cast of ten. These were the performances that caught the eye.

Victor Moore gives a good performance as the blustering George Lomax who is desperately trying to sign an oil deal in Eastern Europe.

Sandra Bass gives a fine, droll performance as Lady Caterham who just simply wants an easy, comfortable life. Through the play her house is home to frenzied chaos and political wheeling and dealing  which she abhors.

Rachele Edson gives a good performance playing Virginia Revel, suitably named, a character with a very different personality. Virginia looks for excitement wherever she can find it, and is delighted when she hears that some blackmailing may be going on.

Rodney Stewart is great as Caterham’s butler Tredwell. Tredwell does, indeed, tread well down the hallway announcing the next visitor to enter the estate.

David Stewart-Hunter looks and acts the part well, playing the role of the police officer in charge, Superintendent Battle

Susan Carveth’s costume designs are superb. Carveth has, for many years, been the primary costume designer for the Genesian Theatre and she always comes up with goods.

THE SECRET OF CHIMNEYS is playing the Genesian Theatre, 420 Kent Street, Sydney until the 17th April, 2021.