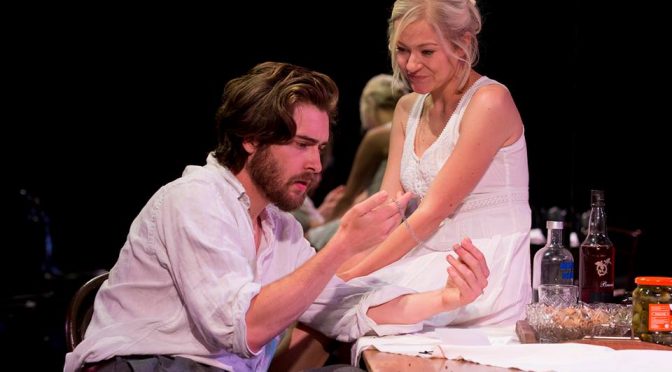 Call me a philistine and throw me to the Chekhovians.  I don’t get. Maybe I started too young.  Us drama types try and immerse in the canon early.  I get Strindberg, I get Ibsen. Can’t blame it on my parents, can’t blame it on Chekhov.  I mean other people get it. Do I need to get it? Probably not!

Imagine my surprise then.  That in a place as strange as Marrickville, with thundering aircraft low overhead and armed with coke and chips because its going to be a sodding 2 hours long. Imagine my surprise to thoroughly enjoy what I might have called in a text to a friend beforehand… Fucking Chekhov.

Secret House Theatre Company has done what no big budget, small budget, opera house or black box studio could do.  I am converted.  This version of THE SEAGULL has taken me by the hand and gently walked me to a place of understanding. And no one is more astonished than I.

I say gently because Director Anthony Skuse has opened the show with humour. Skuse has also penned this adaption and his Act 1 is disarmingly light hearted as the 11 characters populate the stage.

We meet Sorin, Estate owner.  His nephew Konstantin is working with Nina, putting the final touches to a play he has written and which will be performed, for us and them, this evening.  His mother, Arkadina, an actress of note, will attend and nerves around the event are exacerbated by the attendance of Tregorin.  Tregorin is Arkadina’s lover and a writer, also of note.  Eventually all the other characters will attend the play and the complex web of love interests will surface.  Konstantin will give a passionate defence of a new kind of art which he believes his play expresses.  And Arkadina will grandstand and steal his show.

Arkadina is played by Deborah Galanos with a Debbie Reynolds ‘it twirled up’ scene stealing intent. She throws herself about the set attracting all eyes with a shallow arrogance that is beautifully created but carefully short of arch.   The comic nature of this act is centred around her performance.  But this is a terrific ensemble cast and each character has truth and presence in their response which makes it funny and clever.  Yet without the themes being  weakened.  Skuse has taken the text just far enough away from the heavy Russian to a place of accessibility.

The accents are modern, the setting spare and the creative and romantic angst relatable. As the story progresses through four acts, there are sadnesses and darkness which never descend into the gloom we might formerly associate with Chekhov.  The story holds our attention but allows space to consider the ethical and moral implications of the relationships on display.  The final section of the piece might not have the emotional impact I was hoping for but having been so drawn into, even the minor characters’, world the depth of the work is undiminished.

As Konstantin, James Smithers is a suitably dry young man full of passion and his own fits of grandstanding are well played.  He contrasted well with Jane Angharad’s Nina who is delivered with a really well-crafted simplicity and empty-headed girlishness and a well-articulated arc leading to her important last speech.  As Sorin, Alan Faulkner gives an excellent performance to show the gradual loss of influence and faculty.

The doctor, Dorn (Paul Armstrong) has a duplicitous insouciance that endows the bachelor with a certain rapaciousness and Abe Mitchell’s Trigorin projects an entirely believable easily manipulated cad.   I also enjoyed the nicely underplayed performance of Leilani Loau as Polina.  Quietly in the background, her strong stage presence and clearly expressed relationships bring the audience closer to all the other characters around her.  It’s such a good ensemble of actors they are all so enjoyable to watch.

Raising the edges of the front row of seating allows a sunken stage which gives considerable variety in level and travel. The set is light and dark as befits the production.   The lighting is deliciously pale with no moderness to jar on the eye.  The costuming gives enough period feel in a contemporaneous style and the recorded audio is supplemented by live music and song.   While I might have an issue with the pitch and volume of sounds under Nina’s final speech, the live work has variety and relevance and serves to enrich mood and break up the emotion.

Because it is emotional.  Once invested by way of that first act, I was blissfully immersed in their story and lives… plus I has a really screwy meta disturbance of my thinking around art and its creation.  It was such a joy to spend time with them that any preconceptions and worries about going to a Chekhov are swept away.  I loved this show and would now be happy to spend time with Chekhovians.   Another excellent production like this and I might even join their ranks.

THE SEAGULL continues at The Depot Theatre until 16th December 2017.  For more information please visit:-