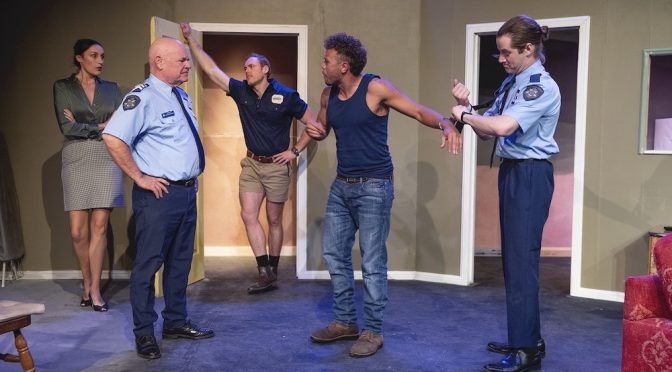 Sitting down to take our seats to see this fiftieth anniversary production of David Williamson’s THE REMOVALISTS, we notice Robyn Arthur’s clear, conventional, period (1970’s) set design. Stage right we have the police station marked by the Sargeant’s desk and filing cabinet. Stage left we have a couple’s apartment, the main feature the living room with sofa leading to an alcove with the kitchen, marked by a fridge, leading to the couple’s bedroom.

The first characters we meet are gruff, burly old timer Sergeant Dan Simmonds masterfully contrasted with the very wet behind his ears, rookie Constable Neville Ross, who work together in a not so busy inner city police station.

Sergeant Simmonds gives Constable Ross an absolute earful, saying the same thing over and over again, ‘I’m the boss here, son, and you better do what I say’, except in different ways. We can tell what Constable Ross is thinking. Why did I get my first posting at this station with this old crony!

Laurence Coy is great as the bullish Sargeant who becomes ever more crass and despicable. We really grow to despise him.

I have seen Coy on numerous occasions over the years. He always nails this kind of role.

Lloyd Allison-Young gives a well measured performance as Constable Ross. It is a big trajectory that he has to transverse. Ross goes from being very nervous and jittery to a young man who has complete meltdown.

The two officers are rabbiting on when two young women, Kate Mason and her younger sister, Fiona Carter, walk into the station. Dan and Ross are suitably startled.

The ladies have come to file a complaint. Kate speaks up for Fiona. Fiona has been assaulted by her husband Kenny and wants him charged. Dan lays on a bit of his flash charm and tries to fob them off. No luck, Dan. They want him to write up a report. A look of disgust and resentment sweeps across his face.

The four of them come up with a plan. Fiona wants to clear out of her possessions before the police come to charge her husband. Kenny is going to be at the pub till late. A removalist is booked and Fiona goes home to get organised.

Shannon Ryan is great as the stuck-up, flirtatious Kate.

Eliza Nicholls is also strong as the anxious, submissive Fiona. A typical woman of her time, she has strong ties with her husband, they have a young daughter, and she finds this path away from Kenny very difficult.

Fiona is busily organising her furniture back home when Kenny comes home early from the pub and wants to spend time with her. He can’t understand why she is behaving in such a thorny manner. After all, it’s ok to slap your wife around a bit.

Fiona and Kenny are busy squabbling when there is a knock on the door. In a very irate mood Kenny answers the door. It is Rob, the removalist. He has come there for a job. Kenny, in as many words, tells him to f… off, and slams the door in his face.

Xavier Coy gives a fine performance as the gruff, heftily built removalist who realises that he is caught in the middle of a major domestic row.

Johann Walraven helms this 50th anniversary production with an impressively tight focus. Williamson’s play is in two Acts and is usually played with a twenty minute interval. Not so in this case with the production running straight through, maintaining the tension.

Walraven’s production dabbles with the play’s dark humour but honours the essential ugliness that Williamson exposes.

I have seen other directors hold back on the violence of the piece but not Walraven.

The violence, the brutality and ugliness of the two officers is fully on display and we have nowhere to hide. Credit goes to fight directors Tim Dashwood and Nigel Poulton.

I saw this production on Wednesday 21 April, the very day that an American jury found former police officer Derek Chauvin guilty of the murder of Afro American George Floyd on the streets of Minneapolis. Chauvin is now looking at a very long jail sentence.

Watching rookie Constable Neville Ross’s meltdown as he laid into  Kenny, in this production a young indigenous man, made one reflect on not only Chauvin’s seismic  brain snap on that fateful day last year, but the whole Black Lives Matter movement, and our own country’s terrible record in regards to black deaths in custody so many years after the findings of the Royal Commission, so few of  which have been acted on.

It was with the premiere of THE REMOVALISTS in 1971 that David Williamson burst onto the Australian theatre scene and he has held eminence ever since.

Fifty years on, this great work could not have more relevance.

A very impressive production, THE REMOVALISTS is playing the New Theatre, 542 King Street, Newtown until Saturday 22nd May, 2021.