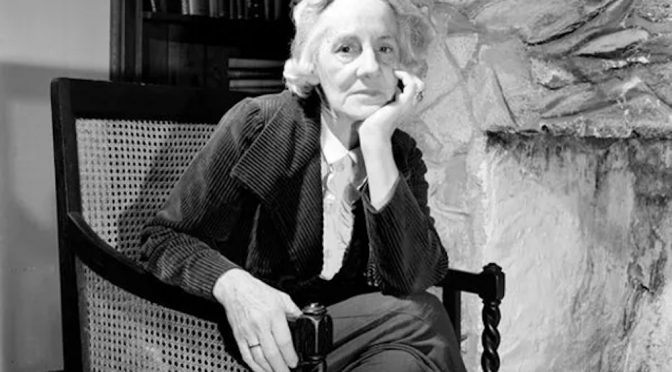 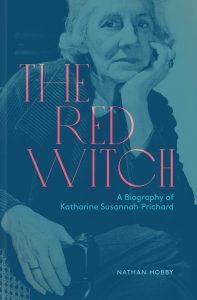 This is an absorbing, compelling biography of one of Australia’s major authors. It is divided into five parts, with thirty nine chapters, a preface and an afterword. There is a list of all Prichard’s works, a bibliography, an index and illustrations are also included.

Extensively, meticulously researched yet written in a most easy to read style, we follow the life of Katharine Susannah Prichard, her many works and travels and see how she was regarded while she was alive, her life of fortitude, how attitudes towards her changed over her lifetime and since, and  her legacy now. The title of the book comes from the friendly moniker by which Prichard, living alone in the hills above Perth, was sometimes known in her later years.

Prichard (hereafter referred to as KSP) is perhaps best known for her books Coonardo, Working Bullocks, The Pioneers and Haxby’s Circus and the goldfields trilogy. For KSP the personal was political, and her politics are interwoven with her assorted various works. A few early acquaintances became steadfast friends – KSP continued to be besties with three women who also had impressive careers – Hilda Bull (later Hilda Esson), Nettie Palmer and Christian Jollie Smith.

Other friends included a mix of political and authorial VIPS’s –  Alfred Deakin, John Curtin, H.V. (Doc) Evatt and  Miles Franklin. KSP became very interested in the theatre as well, writing plays. We come to know KSP as a profuse writer and Hobby interweaves her adversity and achievements with her major life events, politics and family life and numerous works to sympathetically elucidate her fearlessness and at times difficult, awkward persona.

Hobby details KSP’s life, following her childhood in Melbourne after being born in Fiji to Australian parents, the whirlwind marriage to the gallant Victoria Cross recipient Hugo Throssell, her many travels and living in London and elsewhere, life with their son Ric and her long struggling widowhood, her distinguished psyche, her dedication to literature, politics and family and how she was loyal to the Soviet Union and had eccentric habits.

KSP”s marriage to Hugo is central to the story and Hobby details the edginess and stress at time of the marriage as well as the back ground of other relationships before and after.

Also unveiled are many other previously obscured facets of KSP’s life, such as the probable identity of the ‘Preux Chevalier’, the lover who was a great influence in her twenties, the close friendship with poet Hugh McCrae, and her disengagement from political involvement while she was at her literary high point.   Battling insecure health, world peace and Australia continued to be KSP”s major enthusiasms,  until she passed away at her home in Greenmount in 1969. Her home has since been renamed the KSP Writers’ Centre.