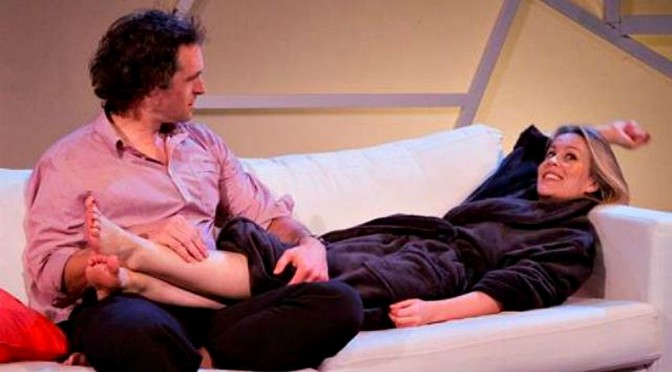 “It’s no trick loving someone at their best. Love is loving them at their worst”

Stoppard’s landmark play, written over thirty years ago now, asks big questions re life, love art and creativity. It blurs illusion and reality, at times– which is ‘real life’ and which is a scene in Henry’s latest play? Sometimes it can be hard to tell but it all becomes clear eventually. It is obviously extremely British and of it’s era (it’s set in the 1960’s) but still extremely relevant to today. At times the theatre patrons were in fits of laughter, at other times they were mesmerised and even close to tears.

The plot of Stoppard’s semi-autobiographical play is as follows; Henry, a successful playwright, has fallen deeply in love with Annie, an actress, and they leave their original partners to start a life together. However Henry is tortured by uncertainty -is what he feels ‘the real thing’ or is it merely an illusion? Annie, on the other hand, espousing the political cause of a soldier arrested for an anti-war protest and pursued by a young, handsome co-star, begins to question the merits of fidelity. Having written a scintillating hit play about adultery, Henry gradually discovers the torment that betrayal can cause.

Emily Weare, of the fabulous cheekbones, imposingly played Charlotte, Henry’s  tall, glacially elegant wife. Charlotte comes across as ultra posh, cold and aloof but is she really? or is her persona more of a defence mechanism?!

Eventually Henry and Annie leave their original partners to be together and we watch how things work out for them.

In the supporting roles, Benjamin Winckle is terrific as Billy, Annie’s handsome co-star as well as playing the soldier Brodie.

The music ranges from Bach and haunting opera, the Skater’s Waltz, to various 1960’s groups and popular songs including Neil Sedaka’s Breaking up is Hard to Do, and the Shirelles Will you still love me Tomorrow?.

Stoppard’s haunting, marvellous play explores relationships, the creative process and the world of Art. The hallmark of Stoppard’s writing is on show; his brilliant, witty dialogue…

Tom Stoppard’s THE REAL THING is playing at the New Theatre until the 7th November. Running time- 2 hours and 30 minutes including one interval.