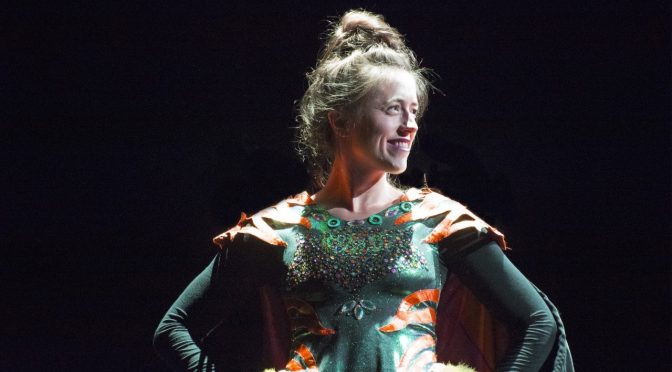 Sorry readers but I am afraid this production was disappointing. Enthusiastically directed by John Galea, The Puzzle Collective is currently presenting an abridged version of both parts of Shakespeare’s Henry IV as well as Henry V, after interval.

The idea behind this adaptation was clever, involving updating the three pieces, and then adapting them to be akin to computer games, with superheroes to make the plays more accessible and contemporary to younger audiences.

The production kept the historical linear narrative as necessarily demanded but it wasn’t sure if it was ‘traditional ‘ Shakespeare ,beautifully ,eloquently spoken or rough and ready in ‘contemporary ‘ style with minimalist staging.

There were three platforms that could be shifted to represent different locations and allowed for fluid scene changes.

For the Cheapside scenes there was an overhanging somewhat futuristic looking contraption which was used to represent the bar and provide drinks.

Three of the main characters Prince Hal (Henry V) , Hotspur and the Dauphin were shown as armour clad battery charged superheroes. Shiny plastics and lasers were uneasily contrasted with medieval and mythical creature costumes. There was some cross dressing and doubling /tripling of parts the cast worked extremely hard and tried their utmost.

The Prince Hal, future Henry V, was given a fine, polished performance by Richard Hilliar. It is made clear from the start to us that he will transform himself and casts off his Cheapside tavern friends – yes, even including Falstaff.

We see Hal grow from playboy to hardworking determined king. The issues of kingship and responsibility hover throughout with excellent renditions of the ‘Upon the King’ speech and we see ‘a little touch of Harry in the night’.

In the second half (Henry V) there are quite good versions of ‘God for Harry England and St George!’ and the St Crispin’s Day speech.

The production asked the questions, Who are your real friends? What do you do with power when you get it? How far is it acceptable to go to keep that uncertain hold on power? Can you be king and still keep your humanity?!

Henry IV, Prince Hal’s father was played strongly as old, ill and rather doddery (reminding of the Red King in the de Valois ballet Checkmate) by David Attrill.

Queen Isabel of France in the second half (Henry V) was played as a mysterious, long white haired seer by Emily Weare.

The battles between England and France were stylized like a computer games, with tightly choreographed fake fights for Hal and Hotspur in Act 1 and Henry and the Dauphin in Act 2.

Our French Princess Katherine, who is awkwardly wooed by Henry V, was enchantingly played by Meghann Martini, a tall, beautiful redhead.She was unhappily hampered by a most unflattering lumpy costume of autumn leaves and flowers. I was wondering whether she was meant to represent the goddess Flora, bringing hope and peace?!

The joyous, meaty role of the lecherous Falstaff was excellently played by John Michael Burdon in a powerful performance. The famous ‘ what is honour? speech was captivating and the pleading ‘but banish not Jack Falstaff’ speech was poignantly rendered.

Mistress Quickly was played as a tall bawdy ‘nurse’ in a white and purple shiny plastic costume with high white boots and blue spiky braids – but why have her SO obscured in Henry V in the second half with her extremely moving speech about Falstaff’s death (‘babbling of green fields’) – yet she is in full widow’s weeds with a long face veil. The whole point of the scene felt lost.

Pascal Rueger had great fun as Glendower and Exeter dressing up as a cloaked and masked secondary superhero.

Catherine Davies as Westmorland was dressed as Britannia ( aka Pallas Athenae) in red and gold with shield and helmet.

Montjoy the herald, who opened the show with the ’O for a muse of fire’ speech from Henry V, was excellently played by Amanda Maple-Brown but wore a very strange, unflattering,  brightly coloured, weirdly feathered costume. Was her character meant to be  a mythical messenger?!

This was an interesting though disappointing evening,

The Puzzle Collective’s production of SUPERHAL is playing at NIDA until March 18.