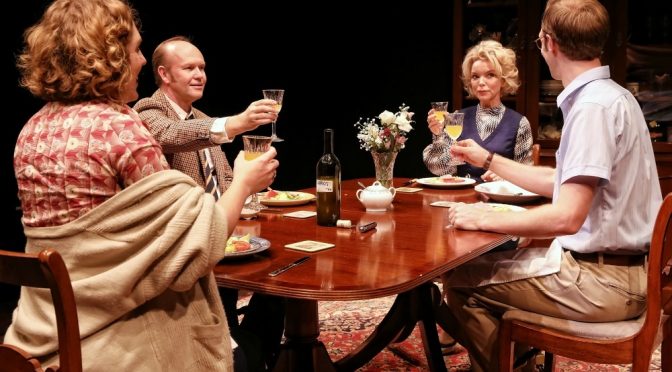 Alan Ayckbourn’s THE NORMAN CONQUESTS has nothing to do with the decisive military conquest of England by William, Duke of Normandy, in the year 1006. It has everything to do with his trilogy of plays about a charming, middle-aged Lothario called Norman and his attempts to make conquests of all the women he meets.

I took the opportunity to see all three plays run consecutively over a Saturday afternoon and evening. The first play, set in the family dining room, is TABLE MANNERS. In this play Norman has set up a d weekend away with Annie, a woman who is wearying of her role looking after her cantankerous, invalid mother. There are just a few glitches – Annie is the sister of Norman’s to the point and career driven wife Ruth.  Also, Annie decides to tell Sarah, the controlling wife of her brother, Reg of the plan that has been hatched and Sarah manages to convince Annie to call the whole thing off. Add to this group of people the shy, introverted local vet Tom, and you have a very promising scenario. Sarah makes the decision to get everyone to share dinner together where some poor table manners are displayed!

The other two plays LIVING TOGETHER and ROUND AND ROUND THE GARDEN are played out with the same characters over the same weekend. We see what happens ‘behind the scenes’ in two other settings within the home, the living room and the front garden.

In short, NORMAN CONQUESTS amounts to an ingenious work of playwriting by Ayckbourn. The plot contrivances are very clever. Each play features at least a few  hysterically funny scenes and it was fun to spend so much time with Ayckbourn’s motley cast of characters.

Mark Kilmurry’s production is fast paced and free flowing.  Yalin Ozucelik gave a very appealing performance in the title role. It is a big role and he does so well with it. Ozucelik’s Norman was charming, funny, incorrigible and an outrageous flirt and attention seeker.

Rachel Gordon gives a very good performance in the role of  Norman’s wife Ruth. Gordon’s Ruth’s is a high flying fiscal manager . She’s a bit of an earthy, no-nonsense, cynical woman who is amused by her husband’s outlandish behaviour.

Matilda Ridgway showed her talent playing the , sensitive, good natured Annie who just wanted to fill her life with a bit of fun as she is the full-time carer for her demanding mother, a character we never meet but we get to know a lot about her! The mum had a risque cabaret past!

Brian Meegan played Annie’s brother Reg, an affable real estate agent and golf lover. It had to be said he was not the most motivated of guys and needed his wife to push him along. Meegan shines in one of the best comic scenes when he gets people to play a  game that he has invented. They criticise him for bringing along a game that doesn’t feel real. It starts him going off on a rant about how great the game of chess is and there’s very little reality about chess. ‘Horses don’t move sideways!’ Meegan’s comic rant is in itself worth the price of admission!

Danielle Carter played Sarah, a character who had more than a bit of the  bossy boots, controlling streak in her. An example was in the Table Manners play where she was the one who decided that everyone should patch their differences and have dinner together, a great leap in optimistic thought! Then she went further,  wanting to decide where everyone would sit at the table! She doesn’t get her own way!

Sam O’Sullivan was a delight as the introverted, shy, fumbling, awkward vet Tom. Through the play people are trying to match-make him with Annie without much luck. He seems more interested in rescuing Annie’s cat, hidden up a tree, than in being  in a relationship with a woman. O’Sullivan’s Tom is one of those gentlemen who appears to have a very low testosterone count. Ruth has a very big lend of Tom in one of the show’s funniest scenes.

TABLE MANNERS is currently playing  at the Ensemble. Later this month LIVING TOGETHER and ROUND THE GARDEN will open. The Ensemble has packaged a few trilogy Saturday’s where all three plays run on the same day however all of these performances have sold out. Recommended, the season of Ayckbourn plays run until 12 January 2019.